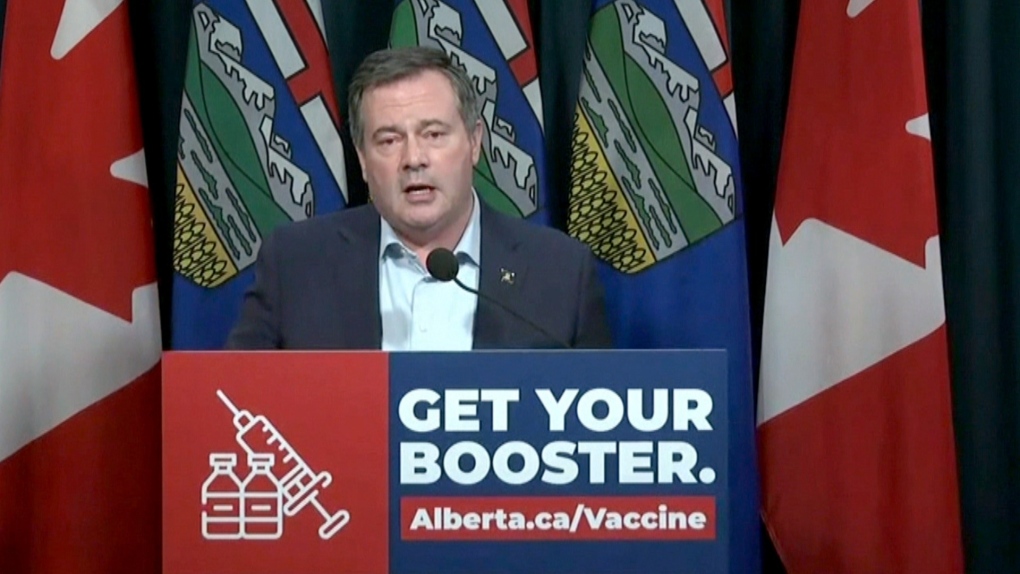 Premier Jason Kenney speaks at a press conference on Tuesday, Dec. 28, 2021. Kenney was feeling "a bit congested" his office said, but there was no need for him to isolate.

Premier Jason Kenney was feeling "a bit congested" on Tuesday according to his office, so he took a rapid test — which came back negative — 30 minutes before attending an afternoon press conference to update COVID-19 case numbers over the weekend.

Kenney's spokesperson, Harrison Fleming, said the premier was otherwise feeling OK, and according to the AHS symptom checker, didn't need to isolate.

But that doesn't quite square with messaging from the province's Chief Medical Officer of Health Dr. Deena Hinshaw, who advised Albertans to stay home if they were experiencing symptoms of any kind, and to assume if you are sick, it's likely the Omicron variant of COVID-19.

“If you have symptoms you should stay home and away from others, even if you feel better,” she said.

“Please do not spend time with others if you are feeling sick, no matter what a rapid test result shows.”

And that led to a debate online over whether the premier should have attended the press conference or gone into isolation until his symptoms subside.

"I've been home for a week with 'congestion' just to be on the safe side. I hope his multi family Christmas was worth it," wrote one Twitter user.

"Again, (Kenney) seem to have two sets of rules -- 1 for the government and 1 for the rest of us. Whatever happened to the idea of government leaders holding themselves to an even higher standard? Beyond quaint and old-fashioned at this point," wrote another.

Be sure to stay home or cancel if you’re feeling sick or have any of the core COVID symptoms including a sore throat, a runny or congested nose, a cough, a fever, or loss of smell or taste. The next few months will be challenging but we can and will get through this. (11/11)

Albertans are legally required to isolate and get tested for COVID-19 if they experience a number of symptoms, including:

Those who are not tested for COVID-19 must isolate for 10 days or until you are feeling better, whichever is longer.

Albertans with other symptoms are also advised to be tested, those include:

The province announced on Tuesday 8,250 new cases over the previous five days, with a record high of 2,500 reported on Dec. 24.

The previous record-high case count was 2,433 reported on April 30.

“We can’t stop Omicron,” Hinshaw said during Tuesday's update. “But we can slow it down.”

Test positivity over the past five days ranged from 17 to 22 per cent, and were as high as 33 per cent in Edmonton and Calgary, according to Hinshaw.

Previous high marks for test positivity had been around 13 per cent.

Aren’t all symptomatic Albertans supposed to stay home?@shoffmanAB, for example, tested negative but has symptoms so she addressed media from home today. #ableg #abhealth https://t.co/2x2Sh5pil8

Premier Kenney literally broke the advice he & @CMOH_Alberta gave at this very press conference: if you are symptomatic with cold-like symptoms, assume your have COVID (omicron) & isolate, regardless of the results of a rapid test (which can give false negatives).

I had two rapid neg tests while symptomatic, one was 8 hrs before my positive PCR test. Seriously stay home, rapid tests produce way too many false negatives.

Again, @jkenney seem to have two sets of rules -- 1 for the government and 1 for the rest of us.

Whatever happened to the idea of government leaders holding themselves to an even higher standard? Beyond quaint and old-fashioned at this point.