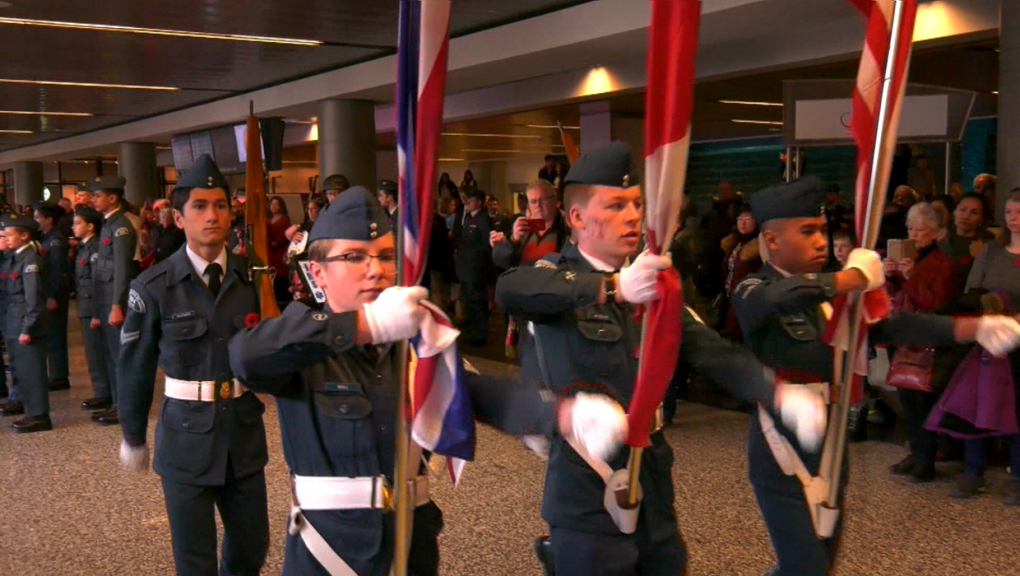 LETHBRIDGE – Thousands of people from around Lethbridge made their way to Exhibition Park for a Remembrance Day service Monday, to pay their respects to soldiers who fought for Canada.

Doug Craik, whose father is 97 years old and marched in the parade, made sure he made it to the service

“It's important to remember our veterans," Craik said. "We live in a country that has lots of freedoms and lots of difference in opinions.

"It’s good that we always come out and pay our respects and it’s important to see my father marching now, he’s 97.”

The service started with a parade consisting of cadets and youth organizations, followed by veterans currently serving and retired.

Maj. Robert Mein addressed the services as the guest speaker, saying "the act of remembrance is as much about you as it is about the fallen."

Two minutes of silences were observed to honour the men and women who served and paid the ultimate sacrifice. The ceremony concluded with wreaths laid for all veterans before people made their way to the Lethbridge Cenotaph for a vigil.

Roland Fielder, a veteran of the Royal Canadian Navy who comes from a deeply enriched military family, took the day in stride, although he admitted it was an emotional one for him

"Right back to my grandfather, who was in the Northwest Mounted Police," Fielder said. "He did a tour of duty in the First World War; and both my sons are members of the Canadian military.

"Young men and women found it in their heart to serve this country, which I’m sure that we all love. The people of this country should realize that the freedoms that they have, are from people that have given."

This Remembrance Day the city embraced a new tradition: firing a minute gun that was shot out of Mountain View Cemetery, with rounds representing the start and finish of the two minutes of silence. The 105 millimeter C-3 howitzer was manned by the 20th Independent Field Battery, which has a long military history, fighting in both world wars.

After the firing, a small ceremony was held at the Field of Honour where First World War and Second World War veterans are buried.

The day marked 101 years since the end of the First World War.