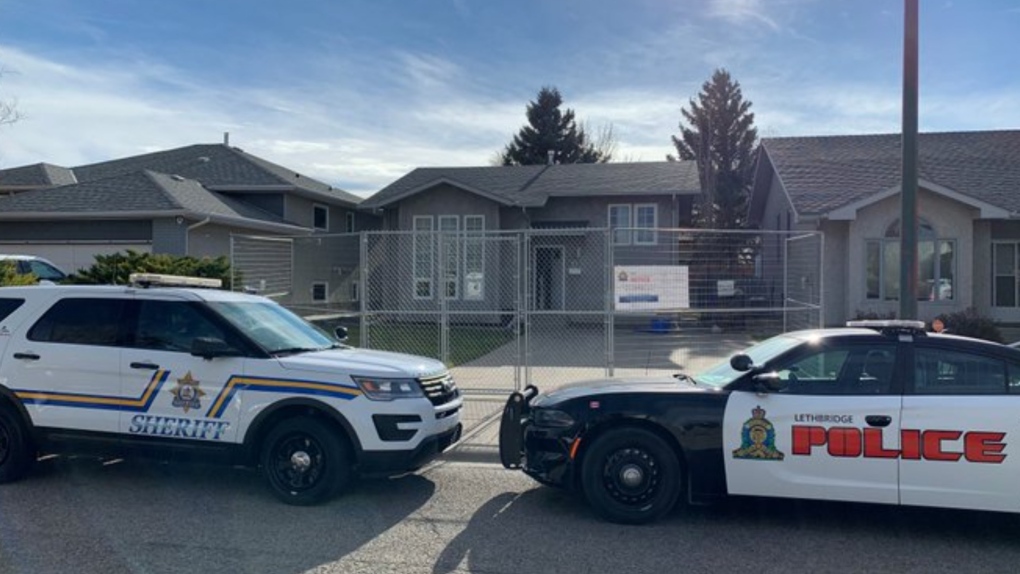 An Alberta Sheriffs vehicle and an LPS unit outside of the home at 71 Stafford Rd. N. after the property was fenced off on Nov. 5 (Twitter/@AlbertaSheriffs)

CALGARY -- Officials have shuttered a problematic Lethbridge home as part of the ongoing effort to curb drug activity in the community.

According to Alberta Sheriffs, the home at 71 Stafford Road N. will be fenced off and boarded up until Feb. 1, 2021.

The decision to shut down the residence was prompted by an investigation by the Safer Communities and Neighbourhood (SCAN) unit dating back to October 2019.

A community safety order issued in July restricted access to the home to only the owner but, according to SCAN, drug activity continued.

SCAN officials say, in a period of four days, more than 150 visits to the home involving alleged drug trafficking were observed.

Lethbridge police have seized significant quantities of drugs — including methamphetamine and cocaine — as a result of traffic stops involving vehicles that were seen driving away from the home.

"Drug houses are a threat to the safety and well-being of our communities," said Minister of Justice and Solicitor General Kaycee Madu in a statement. "I want to thank the excellent work of Alberta’s law enforcement agencies for shutting down this drug house.

"The province’s SCAN unit, in partnership with local police, continues to make neighbourhoods in Lethbridge and across Alberta better, safer places to live."

The home on Stafford Road will remain under supervision through Oct. 14, 2021.

Our Safer Communities and Neighbourhoods (SCAN) unit, in partnership with @lethpolice, has closed a Lethbridge drug house and stopped criminal activities on the property. More details: https://t.co/clN9c8tTpa #yql pic.twitter.com/hKe8wiDfzL