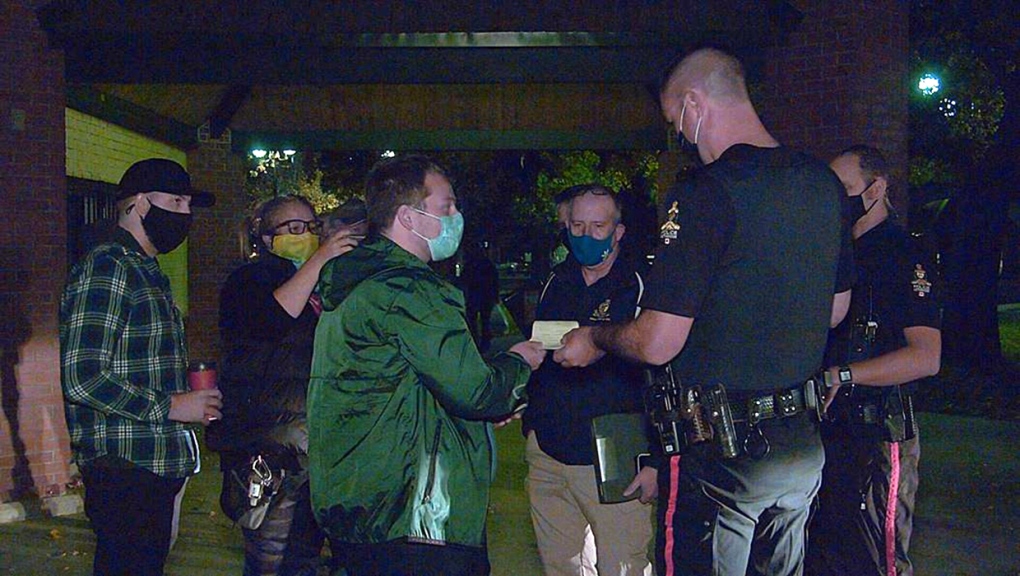 Operators of a pop-up overdose prevention site in Lethbridge say they will continue, despite receiving a fine Monday

CALGARY -- Operators of a pop-up overdose prevention site in Lethbridge are planning to continue their efforts, despite receiving a ticket Monday night for violating a city bylaw.

A representative of the Lethbridge Overdose Prevention Society was issued a violation ticket for setting up a tent, and having an activity without a permit.

“Erecting the structure they have is in conflict with the bylaw,” said Lethbridge’s Sr. Bylaw Enforcement Officer Dave Henley.

The violation carries a $300 fine, however the society maintains they should be exempt under the bylaw, because they are providing a rescue service.

“We maintain that as respondents to overdose, we are rescue personnel,” said spokesperson Tim Slaney, a harm reduction advocate. “The bylaw has a specific exemption that excludes us from those regulations.”

The group set up an orange tent in Galt Gardens last Friday, just days after the province revealed the city of 100,000 has the highest per-capita rate of opioid overdose deaths in Alberta.

Slaney said volunteers have experience and training in how to respond to an overdose, can administer an antidote and call EMS. But the service is unsanctioned, and during a community issues meeting Monday, some city councillors questioned why the tent wasn’t being removed.

Councillor Ryan Parker added “I’m just telling you what the community has told me, that this shouldn’t be allowed. It should be taken down as soon as it goes up.”

Henley said the aim of any bylaw is getting compliance. He said focusing on the tent has overshadowed the underlying issue, which is the social, health and criminal problems stemming from the opioid crisis.

“We want to make sure the parks are a safe place, user-friendly. The group contends they are facilitating safe use of the park,” added Henley.

“We’ll see how this shakes out,” said Slaney. He said they plan to set up the overdose prevention site Tuesday night, but will not offer the service on Wednesday, when the group is scheduled to make a presentation to the Lethbridge Police Commission at their regular monthly meeting.

By continuing to operate, the group could receive more tickets, and is facing the prospect of higher fines for repeat offences.

“I believe this is more important than the monetary penalty,” said Slaney. “I honestly believe that in the end, when we contest those tickets in court, we’re going to be found to be correct and we won’t have to pay any fine.”

But Slaney said in the meantime members of the Lethbridge Overdose Prevention Society will appeal to council to have the ticket rescinded, and provide an exemption to the bylaw.

The group also continues to petition the federal government, in an effort to have the pop-up site declared a sanctioned overdose prevention site.