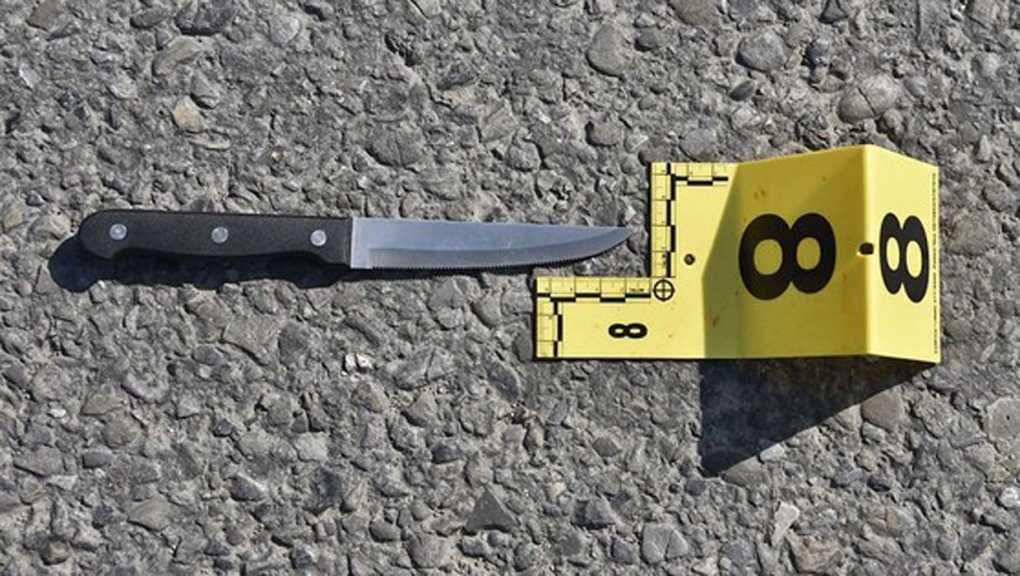 One of two knives recovered from the scene of a fatal police shooting on Aug. 31, 2018. (Supplied/ASIRT)
CALGARY -

A 25-year-old Calgary man, who was suffering from a mental health crisis and armed with a number of knives, was shot to death by police almost three years ago.

ASIRT has now determined the officer's actions were justified.

The provincial agency, which investigates all incidents where police actions result in the serious injury or death to any person, was notified about an incident that occurred in late August 2018.

According to the report, released Wednesday, ASIRT says the Calgary Police Service was first called to a situation at about 10 p.m. on Aug. 30, 2018, at a local gym where the victim of the police shooting, a 25-year-old man, had gotten into a fight and been told to leave.

As the man was being told to leave the premises, ASIRT says he made a number of statements that "raised concerns for his mental health."

The man then drove around the parking lot for approximately an hour.

"When CPS members arrived at the scene, the man was still driving around the parking lot. They attempted to stop the vehicle, but he failed to stop. At about 11:57 p.m., the man drove out of the gym parking lot and proceeded eastbound at a high rate of speed on Country Hills Boulevard, in the direction of (his family's) residence," ASIRT said.

Police made contact with the man's family and learned of possible mental health concerns. So, in order to avoid aggravating him, HAWCS was instructed to monitor the man while CPS vehicles followed at a safe distance.

ASIRT says the man continued to drive at a high rate of speed, at times putting the public in grave danger.

"The man drove at a high rate of speed, not stopping at red lights, at points on the wrong side of the road."

Once the man arrived at his family's residence, he noticed the police presence and drove away once more.

"The man continued to drive dangerously, frequently on the wrong side of the road, at one point driving down a bike path. He also appeared to try to ram a marked police vehicle."

At no point did police attempt to stop him, ASIRT says, instead deciding to remove his family from the home for their safety and order all units to leave the area.

ASIRT says police, along with the man's family members, attempted to speak with him over the phone in an attempt to defuse the situation.

"The man sounded agitated and refused to exit the residence with empty hands," ASIRT said. "Police had his vehicle towed with the aim of preventing the man from leaving the residence in that vehicle and potentially harming himself or others as a result of his dangerous driving.

"After several hours involving sporadic contact with the man, it became apparent that he would not voluntarily be leaving the residence. At several points, he was asked to come out, but said he would not."

At that time, unbeknownst to police at the time, the man posted a video onto his Instagram account that was created before returning home.

In the clip, he calmly stated, "Beat me to death or run me over… or whatever you can, kill me… Thank you."

Family members attempted to speak to the man, but once he determined they were helping police, he became "even more agitated."

"The man said words to the effect that he was not going to come outside, and that the police would have to come in and get him. He appeared to be most agitated and angry with the involvement of police. During one phone call with an officer, the man commented that if he left the residence and police tried to arrest him, he would kill the officers."

ASIRT says the man also made threats that he would attack officers if they entered the home, harm his family members and stated that "the devil was playing his games."

"The officers had limited options at that point," ASIRT said. "While the family offered to provide them with a key to the premises, there was arguably a legal requirement, absent exigent circumstances, for them to obtain judicial authorization to enter the home and arrest the man."

Given the outcomes of situations involving police standoffs with mentally ill individuals, police made the decision to inform the man's family members to find another place to stay for the night. Officers also cleared the area, satisfied that with removing the man's vehicle, they had "diminished the risk to public safety."

Approximately three hours later, neighbours called police to report loud music coming from the home. The residents were concerned for their safety given knowledge of the earlier events, ASIRT said.

Officers, including the member involved in the fatal shooting, were dispatched to the scene and a CPS member called ahead to ask him to turn down the music. The man declined to answer the phone.

POLICE REALIZE DANGER TO THE PUBLIC

As police were patrolling the area, they located the man walking southbound on the west side of Redstone Street N.E. It was noted that he was armed with a knife.

"Given the armed man’s earlier behaviour, the officers feared that he might harm anyone he encountered, and the officer in the passenger seat believed that he needed to be apprehended," ASIRT wrote.

While inside the police vehicle, the officer in the passenger seat challenged the man, pointing a less-lethal ARWEN launcher out the open window at him. While the man first ignored police, he soon began to taunt them.

The officer then asked for and received permission to open fire with the ARWEN.

"While he aimed the shot at the man’s upper left thigh, it had no observable effect. The officer fired again," ASIRT said. "This round appeared to have some impact, as the man lifted his leg, however, it did not stop the man or cause him to drop the knife."

The man fled from police, running through a dirt field, and police pursued in the vehicle.

After briefly losing sight of the man in the darkness, the officers used a security light and located him running between some duplexes.

"There was a concern that the man might try to gain entry into the residences," ASIRT said."

Officers drove west down an alley to return to Redstone Street N.E., where they located the man again. This time, he was carrying two knives, one in each hand.

They continued to issue commands, instructing him to drop the knives, which were ignored. The officer fired again with the ARWEN, but missed.

While the ARWEN was being reloaded by the officer in the passenger seat, that's when the man rushed at the police vehicle, pushing his upper body through the window while slashing with the two knives.

"Audio recordings captured the sounds of a struggle. As the officer pushed back and away in his seat to avoid being cut by the knives and attempted to release his service pistol from his holster, the subject officer drew his service weapon and fired three shots at the man from close range. The man was struck and fell out of the window and to the ground."

ASIRT said the two officers then exited the vehicle and began to administer first aid while additional units and EMS were called to the scene.

The man was taken to hospital, where he was pronounced dead.

Police located two knives – a paring knife and steak knife – on the ground near the man. Another steak knife was found in the man's pants. 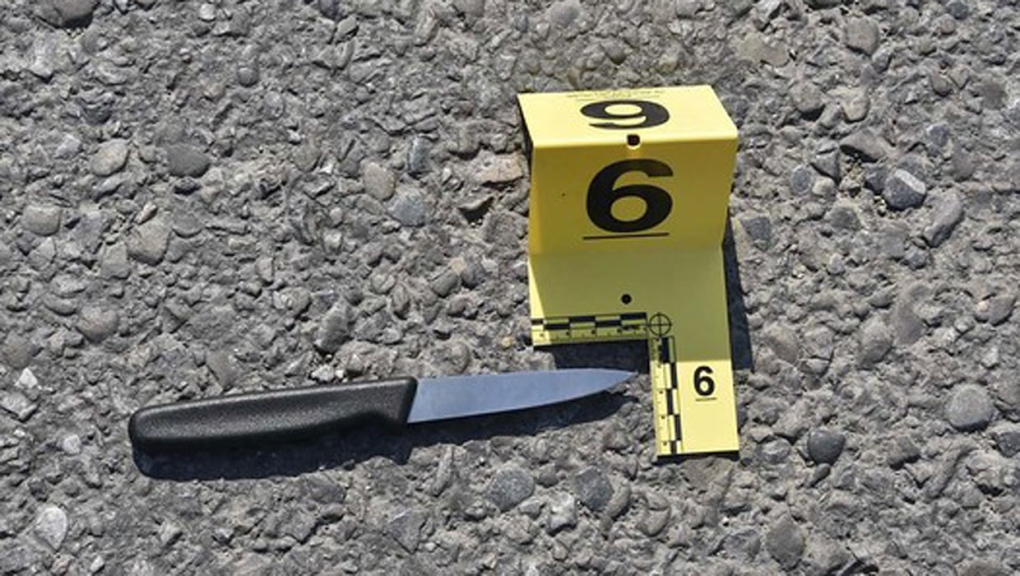 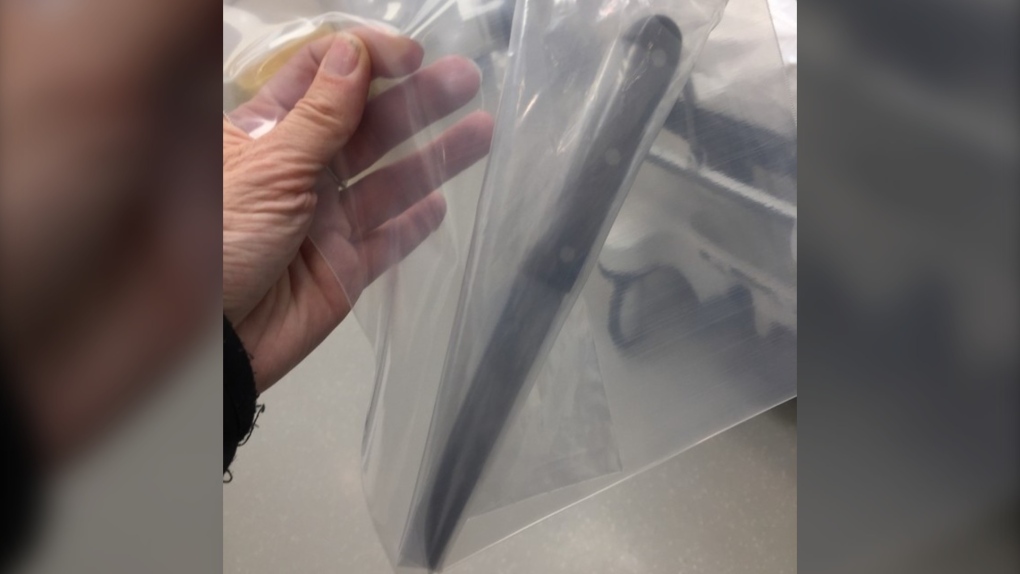 The officer in the passenger seat, during his interview with ASIRT, said he couldn't believe he was not stabbed in the confrontation.

"He said that when the man pushed into the vehicle from the open passenger side window, swinging the knives, he thought he would die."

USE OF FORCE WAS NECESSARY: ASIRT

ASIRT says while the officer's actions did cause the man's death, his actions escalated the situation and presented a clear danger to members of the public.

"Under Section 25 of the Criminal Code, police officers are permitted to use as much force as is necessary in the execution of their duties. Where this force is intended or is likely to cause death or grievous bodily harm, the officer must believe on reasonable grounds that the force is necessary for the self-preservation of the officer or preservation of anyone under that officer’s protection.

"When the man leaned into the vehicle armed with two knives, the risk of death or grievous bodily harm was now immediate."

Based on the evidence collected through the investigation, ASIRT said there are no reasonable grounds or suspicion that the officer involved in the situation committed any offences.

Additionally, the officers did engage in less-lethal means – the ARWEN launcher – but it did not force him to drop the knife or stop him.

"Failing to engage with the man and permitting him to continue would have been inexcusable, especially had he encountered and wounded or killed a civilian in this residential area. He needed to be stopped.

"It was only when the man attacked, placing the officer in the passenger seat immediately in critical danger, that the subject officer drew his service pistol and resorted to lethal force."