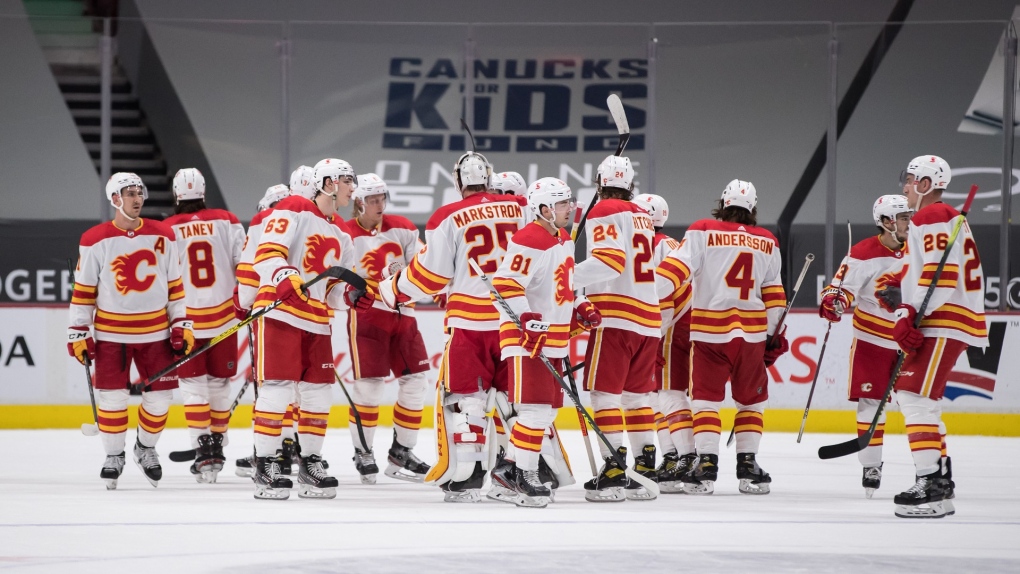 Calgary Flames players celebrate the team's overtime win against the Vancouver Canucks during an NHL hockey game in Vancouver, B.C., Sunday, May 16, 2021. THE CANADIAN PRESS/Darryl Dyck

VANCOUVER -- In a game with little to play for besides pride, the Vancouver Canucks felt they did enough to hold their heads high despite losing in overtime.

The Canucks overcame a four-goal deficit in the third period against Calgary to force OT. Elias Lindholm scored the winner and the Flames held on for a thrilling 6-5 win.

After a second period in which they struggled mightily, Vancouver looked like a completely different team in the third and scored four times on 18 shots.

"Any team going into a situation like that, you have to show character and some pride, not leaving your goalie out to dry any more than we had," said J.T. Miller, who scored and added two assists. "It was definitely a good push. Really wanted to get two points after making it pretty close there.

"Good hard-fought game, obviously we should be proud of the way we responded in the third."

Down 5-1, Vancouver scored back-to-back power-play markers with Tyler Graovac netting the first at 2:30 before Brock Boeser made it 5-3 at 7:47.

Miller brought the home team within one with a short-handed tally at 11:28 and Boeser completed the comeback with his second of the game with 2:02 left on the clock.

"It was just special teams, third period, our penalty kill wasn't very good in the third and our power play was not very good all night," said Flames head coach Darryl Sutter. “There wasn't a whole lot going on out there.”

Boeser nearly won it for the Canucks in overtime but his shot rang off the post. Lindholm ended the game moments later when his centering pass went off Alexander Edler and in at 3:24.

"We have guys in the room that really care," said Quinn Hughes, who assisted on three goals. "Nobody was happy with how our second period went. I think we wanted to come out in the third and try our best and see what we could do."

It didn't look like the game would end in overtime after Calgary jumped to a 4-0 lead.

Josh Leivo put the Flames in front 9:30 into the opening frame after intercepting a soft pass from Jonah Gadjovich at the blue line and beating Braden Holtby on the backhand. Gadjovich was making his NHL debut.

Calgary, which improved to 19-5-2 when scoring first, took control of the contest with three goals in a 2:17 span in the second.

On an odd-man rush, Leivo's pass went off Milan Lucic's skate and in past Holtby at 5:48.

Matthew Tkachuk made it 3-0 for the visitors at 7:17 when his missed shot bounced off the end boards and landed perfectly on his stick for his own rebound.

Calgary increased its lead a minute later when Andrew Mangiapane took a pass from a falling Dillon Dube off his skate before chipping it over the Canucks goalie.

Vancouver got on the board through Travis Hamonic's second of the season at 13:21 but Mangiapane restored the four-goal lead 42 seconds later off an offensive-zone face-off win.

The Flames are 6-2 against the Canucks this season.

They'll face each other two more times to end the campaign. Meanwhile, several post-season matchups have already gotten underway elsewhere in the league.

The overlap is due to Canucks games being postponed earlier this year after a COVID-19 outbreak swept through Vancouver's team and halted their schedule for three weeks.

This report by The Canadian Press was first published May 16, 2021.