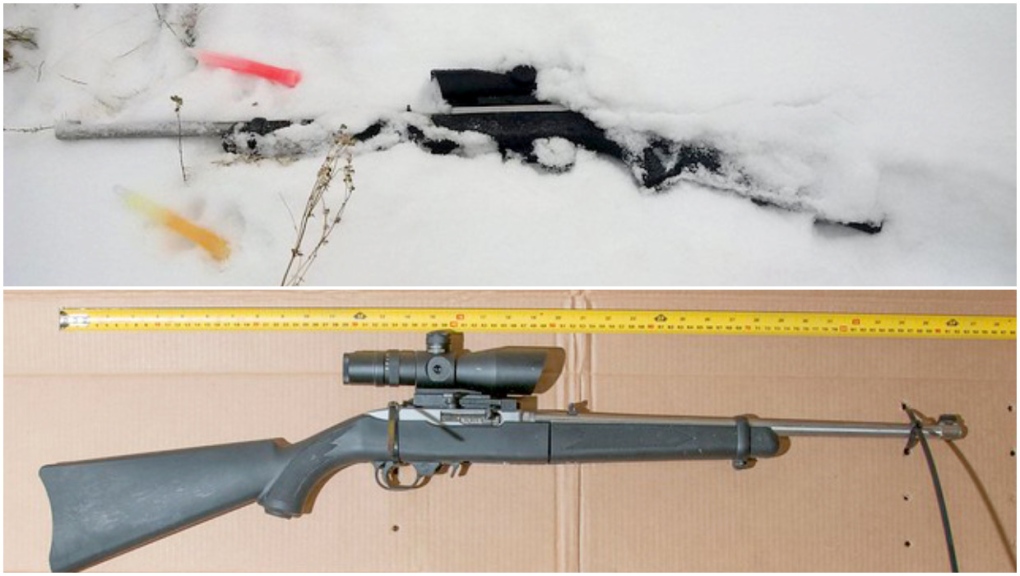 RCMP recovered a rifle from the snow near where a man was fatally shot in Cochrane. (ASIRT)

CALGARY -- RCMP recovered a loaded, .22 calibre, semi-automatic rifle near where a 28-year-old man was shot and killed by officers early Saturday, according to the Alberta Serious Incident Response Team investigating his death.

And the police watchdog says several bullets were fired through a garage door toward officers before the man emerged, where he was shot.

RCMP and Calgary police were called to a home in Cochrane Friday evening by two separate people concerned about the man's behaviour and messages he had sent, ASIRT said in a release.

Police were also told the man had several firearms, despite court conditions against that.

Officers decided to arrest the man for the breach of conditions and arrived at the home, which they say was on a residential street in northwest Cochrane, around 7 p.m.

The man was the only person in the home and barricaded himself inside.

The RCMP Emergency Response Team was called in and police got a warrant to go in the home to arrest the man, however they instead made phone contact with him.

Attempts were made over the next several hours to get the man to surrender, however he refused.

An RCMP armoured vehicle was brought to the rear of the residence and parked near an overhead door to the attached garage.

Soon after, "five to six shots were believed to have been fired from inside the garage, through the solid garage vehicle door, in what would have been in the general direction of the armoured vehicle," according to ASIRT.

After a chemical agent was deployed inside, the man came out of the garage about 1:40 a.m. and after a confrontation, an officer fired, striking the man.

He was rushed to hospital, where he later died.

The man's name has not been released. ASIRT investigates whenever someone is seriously injured or killed by police.