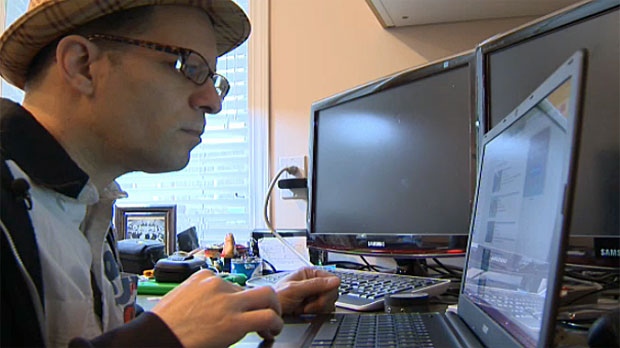 Art Proctor wants to bring a talk show to transit and says he can do in on a shoestring budget.

A local entertainer is trying to drum up support to take his late-night style, talk show on the road and has his sights set on transit to deliver his message.

Art Proctor has worked in Calgary's film and theatre industry for two decades and is pitching an idea for a program that would be set on a city bus.

“I just think that it would be super cool to have a talk show on a bus,” said Proctor. “This would be a fantastic idea to promote Calgary, promote Calgary Transit, promote Calgary tourism, so if any and all of these organizations would buy into this idea, the things that they could do with this is numerous.”

He says people are already being entertained while riding transit but his idea takes it to the next level.

“90 percent of the people that are on transit actually have a smartphone in their hand and they’re checking their day-to-day things and they’re watching videos and emails, Facebook, twitter, whatever, so you have a captive audience so why not utilize that captive audience for something fun and informative,” he said.

Proctor says he has pitched the idea to Ward 11 Councillor Brian Pincott and is working to bring the idea to transit officials.

“I’m starting small. See where it goes. I proposed a ten-part episode, just to give it a test run. It would be primarily local based, so civic leaders, local arts and entertainment professionals and just have some fun with it,” said Proctor.

Transit officials say they get a number of requests to film on city buses and that there is a process for this type of thing.

“We do have  protocols that we follow and that is to send the request to the Calgary Economic Development Authority for their opinion and then they get back to us with a request about should we be following up on this or not,” said Ron Collins from Calgary Transit. “We look at what is the film? What is the media, what are they going to be showing? That sort of thing and a determination is made from there.”

Proctor says he would outfit the bus with lights and cameras and have an invited studio audience ride while the show is being recorded.

“It would probably be a closed set so it would be similar to a regular talk show where you get invited audience members and then you actually have a set, a schedule of who the guest is going to be, all that kind of stuff, literally Craig Ferguson on a bus.”

Proctor says he would like to start shooting in March and would like to make the production available for viewing through an app or on the city’s website.