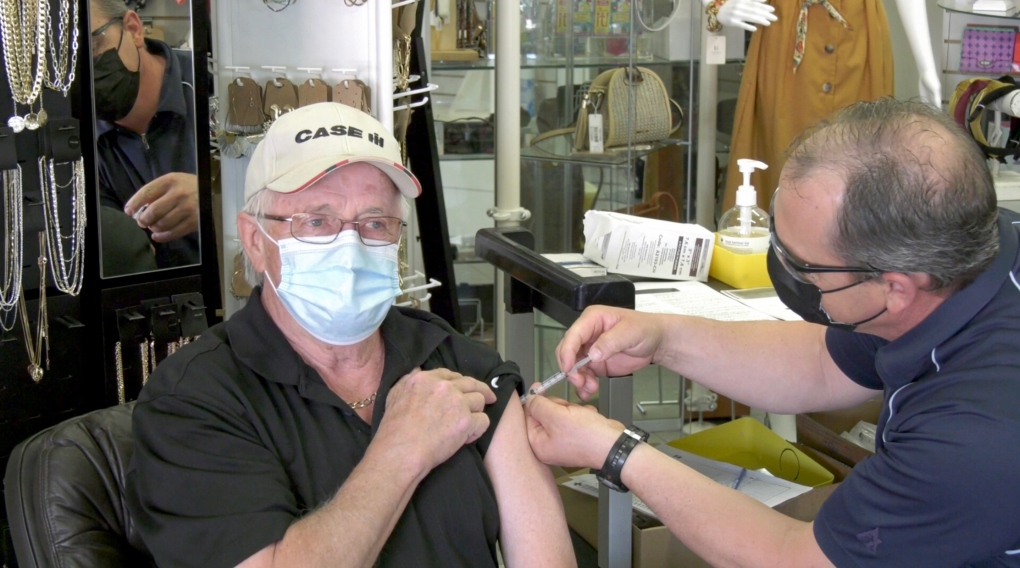 A resident receives a vaccination against COVID-19 in Taber, Alta.
LETHBRIDGE -

Some rural communities in Alberta are hovering around a 50 per cent vaccination rate, while others are still below 40 per cent.

Despite the recent dip in active cases and hospitalization across the province, the level of poor vaccine uptake is still having an impact on Alberta's healthcare system.

"We still have a lot of COVID patients. Most of our ICU is still COVID patients. We are still admitting people who are quite unwell with COVID on a regular basis, probably a few a day at least," said Dr. Sean Wilde, an ER physician at the Chinook Regional Hospital.

"Most of our sick COVID patients are from the outlying rural communities around Lethbridge and I think it's very clear that's related to the lower vaccination rates in those communities."

More than 66 per cent of Alberta's eligible population is fully vaccinated.

Lethbridge is above that average with roughly 70 per cent of eligible residents fully vaccinated, but nearby communities are reporting much lower rates, according to the province.

The County of Forty Mile has the lowest percentage of fully vaccinated eligible residents, with just 33 per cent of that population fully protected, while the Municipal District of Taber is just slightly below 40 per cent.

"It's become uncommon to see someone from Lethbridge who is quite unwell with COVID. It's usually from a rural site around us," said Wilde.

"The very sick patients don't stay in the small towns. They always go to the cities so in a hospitalization sense, the cities are always going to show the higher admissions of sick people in the ICU counts."

According to provincial figures, the lowest vaccination rate is north of Edmonton in High Level, where just 18.8 per cent of those eligible have received both shots.

At the Chinook Regional Hospital, Wilde says he's now noticing more people needing post-COVID supports, after the brunt of the disease wears off.

"Patients are taking up rehabilitation spaces now too. Long ICU stays tend to make people very weak, and it takes a long time to get strength back, so many of them are  going to be in the hospital for a long time as well," Wilde told CTV News.

She says the pandemic devastated her business.

"A lot of people when we closed down started cutting their own hair," she says, "And I run into my clients now and say who cut your hair? They say (their) husband. But I have to come to you get it fixed. "

Clearwater says business picked up when lockdowns were lifted, but things are slowing down again.

Less than 60 per cent of the eligible population in Three Hills are vaccinated, and many people who aren't are simply staying home, since many businesses are now shut to them as the province enforces its Vaccine Exemption Program.

Clearwater says she is fully vaccinated and hopes her clients are as well, but doesn't feel comfortable asking them, especially when things are tight.

"Some clients tell me they are vaccinated, others say they're never getting it. I think that's just the way it is, some people believe in it, some don't."

Peter Tiong has been a pharmacist in Three Hills for nearly 30 years.

He says many clients in the area are skeptical about Covid-19 vaccines, mainly because of misinformation on social media.

He's now scheduling half-hour appointments with residents, specifically to answer all their questions about vaccinations and reassure people of vaccine safety.

"I think there is just a lot of people unsure of the vaccine because it's a brand new," he said.

Tiong says over the summer, there would be days when he wouldn't give a single vaccine.

A big part of that, he says, is many employers requiring staff to be vaccinated. But he also says some who were previously skeptical are becoming more comfortable with the idea.

"If they're not sure, they come asks us," he said.

"Not just about the vaccines but basically everything. Anything about health. What they hear. If it's true or not. If it's safe or not."

Health officials hope people realized the vaccines are safe, and that Albertans outside the major cities will also get their shots, so things can return to normal.

More than 6.4 million total doses of COVID-19 vaccine have been administered in Alberta since last December.