'Luck is certainly part of it': 1913 Alberta licence plate pulled from banks of the Bow River in Calgary 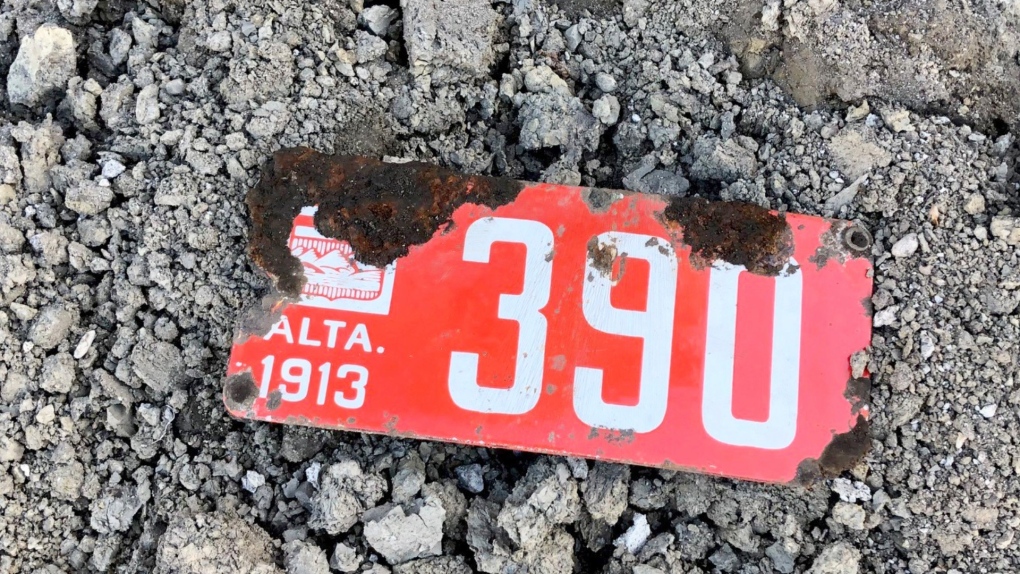 A licence plate from 1913 was discovered by crews working near the Centre Street Bridge. (Courtesy City of Calgary)
CALGARY -

It's not unusual to find an old licence plate in a riverbed.

But finding one that is 108 years old, and in near pristine condition, doesn't happen every day.

Crews working on the Downtown Flood Barrier and Eau Claire Promenade project discovered a red and white Alberta plate marked with the number '390' on the south banks of the Bow River, near the Centre Street Bridge on Tuesday.

"Working in an area like this, along the banks of the river where we know there's historical relevance, we make sure we're prepared and expect to find items like this, so we have an archaeologist on site," said Jeff Baird, a senior transportation engineer with the city.

"They're monitoring the excavation as we go through, looking for things like this."

It was found "below grade," Baird said, meaning it was buried.

"We do work through these areas with care and not just go through and rip it up and haul it away," he said.

"There is a level of care and detail, especially working around the river like this, there's that inherent cautious excavation and demolition and construction activities we would undertake. It's fortunate it did come out in such good condition."

The city and province are now working to learn more about the plate, and potentially link it to a previous owner.

"We're working with the province to analyze and document and discover whatever information we can on it," Baird said.

"At this point there would be no reason to believe it wasn't real. Definitely an exciting part of the story is finding out who it did belong to."

Work along the riverbank is one of several projects ongoing in the area since the 2013 flood.

Finding buried treasures from the past isn't that uncommon, Baird said, which is why an archaeologist is involved in construction.

"It really depends on the project and the location," he said. "In areas like this, the Eau Claire area, along the riverbanks especially, it's certainly more frequent to find things like this. It's things that can arise from previous construction as well, so obviously there has been work in that area for quite some time."

The fact the plate is in such good shape involved a bit of luck.

"There's several factors that can play into that," Baird said.

"Luck is certainly part of it. Being where it is within the fill and the excavation there, things can be preserved pretty well if they're not exposed to the elements."