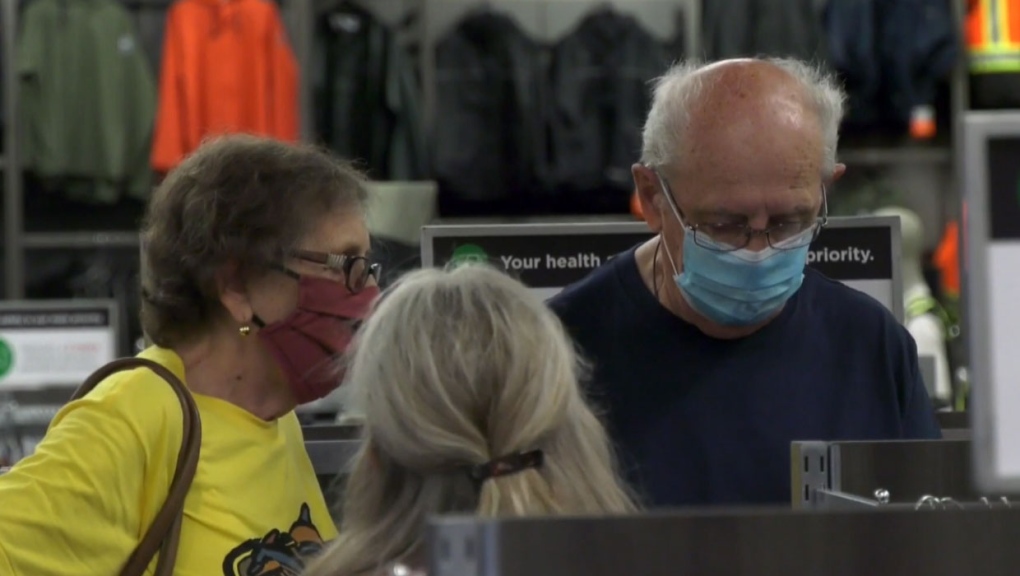 CALGARY -- A recently conducted poll suggests most Albertans believe the COVID-19-related restrictions implemented by the province were too lax and face coverings should be mandated in all indoor public spaces.

Face mask use in indoor public areas is recommended but has not been mandated by the provincial government. As of Monday, it is at the discretion of municipalities to enact bylaws regarding mask use.

Face covering bylaws are currently in place in several cities and towns in Alberta including Calgary, Edmonton, Airdrie, Okotoks, and Chestermere. Proposed mask bylaws have been voted down in Strathmore and Black Diamond.

When it comes to potentially mandating face mask use in all indoor public spaces in Alberta, 81 per cent of respondents supported the move compared to 16 per cent who opposed it.

"Ten days ago, the Provincial Government introduced new measures to blunt the spread of the virus, but they appear to be ineffective, both from a public health and political perspective," said ThinkHQ president Marc Henry in a statement. "The case counts keep climbing, and in many respects, there is growing public disaffection with the lack of something more tangible from government to stop it."

The poll, which surveyed 1,126 adults in Alberta and was conducted by an online research panel, found a significant partisan divide on the issue of COVID-19-related restrictions.

The vast majority of respondents who indicated that they had voted NDP in the most recent provincial election felt the restrictions announced Nov. 12 were insufficient (81 per cent) while only 36 per cent of self-identified Conservative voters said the restrictions did no go far enough.

"Beyond the obvious public health situation, the Kenney government has both a communications and political problem on their hands; they are trying to thread an almost impossibly small needle," said Henry. "Aside from reprising our spring lockdown, the most obvious action was, and remains, imposing a provincial mask mandate, banning private social gatherings and enhanced enforcement, yet the Conservatives have been reluctant to move in this direction.

"Though most of their supporters would likely support them in taking such actions, there is a minority (comprised predominantly of UCP voters) who would strongly bristle."

The margin of error for a comparable probability-based random sample of a similar size if +/- 2.9 percentage points, 19 times out of 20.