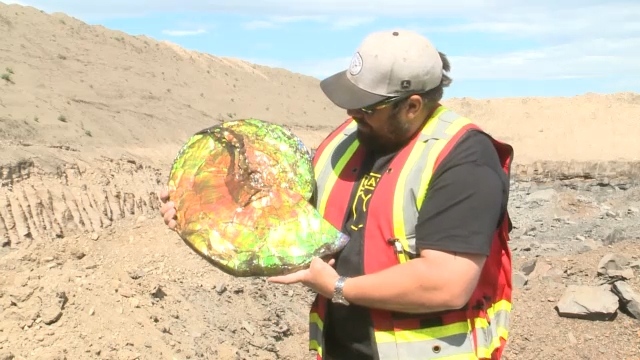 In this file photo, mine manager Mike Shideler holds a piece of ammonite fossil like the one that was stolen from the mine. Logan Heavy Shields, 26, pleaded not guilty to charges of theft and trespassing in connection with an incident at the ammonite mine near Lethbridge last July.

CALGARY -- A man charged with trying to steal the fossil of an ancient shellfish last summer pleaded not guilty to charges of theft and trespassing in a Lethbridge courtroom Wednesday.

Logan Heavy Shields, 26, was arrested following an incident that took place on July 18 of last year.

Workers at a pit mine near the community were on a lunch break when they witnessed two men approach one of the sites.

One of the suspects ended up climbing down the embankment, picked up a multi-coloured fossil and stuffed it into a backpack before fleeing the scene in a pickup truck.

Following a police investigation, Heavy Shields was arrested and charged with theft over $5,000 and a charge under the Petty Trespass Act.

He pleaded not guilty to those charges and a trial date is expected to be set at his next court appearance on Jan. 22.