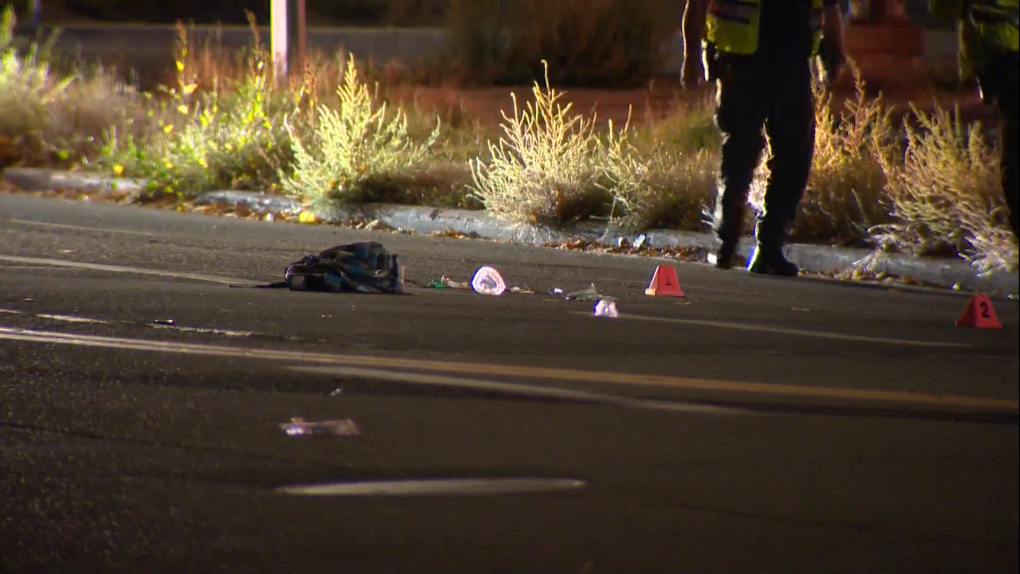 Personal items and evidence markers on 50 Avenue during the investigation into an early morning hit-and-run near Macleod Trail.
CALGARY -

Police have arrested a man in connection to a deadly hit-and-run in the city's southwest earlier this month.

The victim was hit by a pickup truck travelling westbound on 50 Avenue S.W. between First Street and Macleod Trail at around 2:15 a.m. on Friday, Oct. 1.

Police said the truck didn't stop, and instead continued to the intersection of Macleod Trail before leaving the area.

The victim was rushed to hospital in life-threatening condition where he later died.

On Wednesday, police said a 45-year-old man had been arrested in connection to the hit-and-run. His silver 2007 Dodge Ram has also been seized and is being examined by investigators.

"No charges have been laid at this time as collision reconstruction investigations can take months to complete due to their complexity," police said.

The name and age of the victim haven't yet been released.

Anyone who witnessed the collision or has any further details about the crash is asked to call the Calgary Police Service's non-emergency line at 403-266-1234 or contact Crime Stoppers immediately.

Colin Powell, the first Black U.S. secretary of state whose leadership in several Republican administrations helped shape American foreign policy in the last years of the 20th century and the early years of the 21st, has died from complications from COVID-19, his family said on Facebook.

The body of a Montreal firefighter who went under the water Sunday night assisting a boat in distress has been pulled from the water along with the boat he was trapped under.

A growing number of Canadian hospitals are enacting policies requiring visitors and care partners to show proof of vaccination in order to gain entry, sparking yet another pandemic-era debate for ethicists.