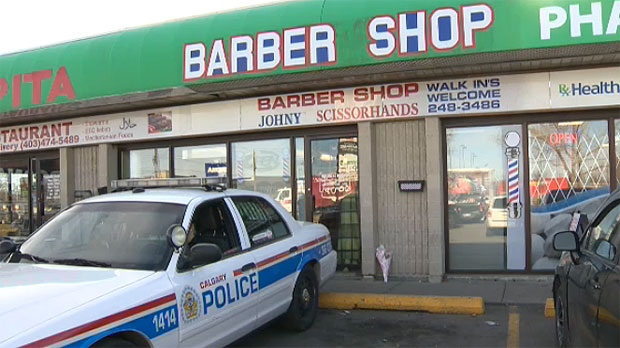 Two men are facing a number of charges in connection to a homicide, attempted murder and a drug and weapons seizure that happened over the past year.

The men are charged in connection to three separate cases including the targeted shooting of a man at a southeast barbershop last month.

“This is a dispute between drugs, gang-like activity. Who’s involved and how they’re aligned still remains a mystery to us,” said S/Sgt Quinn Jacques, CPS Guns and Gangs Unit. “This is an ongoing issue in Calgary that we’ve reported on many times and it still remains to be quite difficult to understand the players that are involved, the motivation behind all of this violence, we believe it’s largely based on drugs, but it seems to be somewhat based in just violence and hatred towards one another.”

Police were called to a convenience store in the 5300 block of Rundlehorn Drive NE at about 8:15 p.m. on January of this year for reports of a shooting.

Investigators say two men went into the store to buy something and as they left, were nearly hit by a vehicle in the parking lot.

An argument ensued and one of the pedestrians was shot by someone in the vehicle and more shots were fired from the vehicle as it left the scene.

A man in his 20s was taken to hospital in life threatening condition and has since been released.

Police believe the victim did not know the occupants of the vehicle and that the shooting resulted from a verbal altercation over the near collision.

Talal Amer and Redear Kadir-Shahwan were arrested and charged on Thursday in connection to the incident.

He is scheduled to appear in court on Monday.

Kadir-Shahwan, 22, of Calgary is charged with attempted murder, possession of a weapon for a dangerous purpose, unauthorized possession of a firearm, firearm in a motor vehicle and possession of a prohibited firearm with ammunition and appeared in court on the charges on Friday.

Police were called to Johny Scissorhands Barber Shop in the 5100 block of 20 Avenue S.E. at about 5:00 p.m. on November 14 for reports of a shooting.

Investigators say a man entered the shop and spoke to a customer briefly before pulling a gun and shooting him.

Khalid El-Ajami, 30, of Calgary died at the scene despite efforts to revive him.

Redear Kadir-Shahwan is charged with first-degree murder and appeared in court on Friday morning.

Police say it was a mid to high level drug operation and investigated the case in connection to a number of other violent incidents that have happened in the city in recent months.

Sam Osama Altenawe was charged with a number of offences in relation to the case and police were looking for additional suspects.

On Thursday, Wael Hammoud was arrested on warrants for drug and weapons offences in the case.