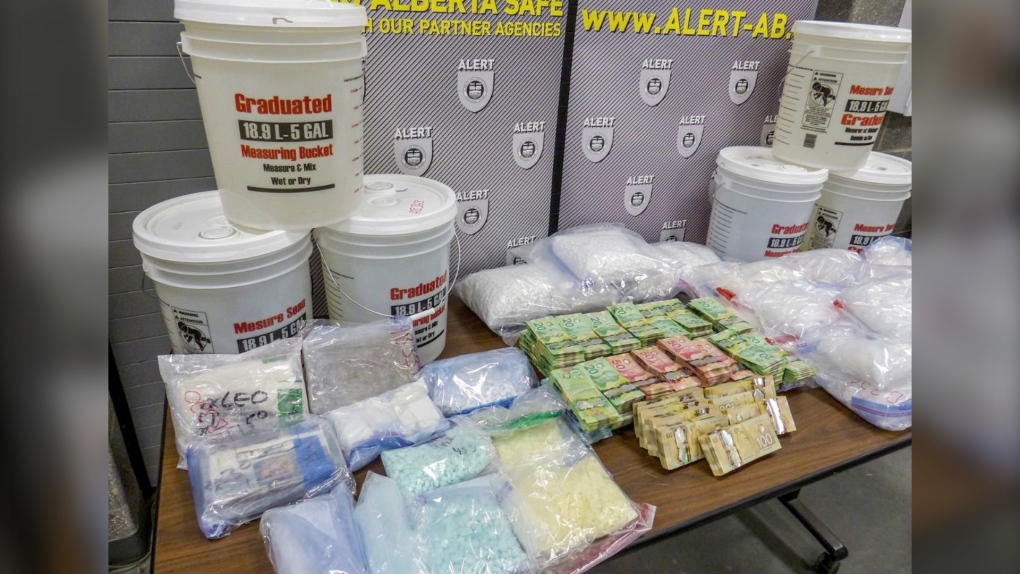 Some of the drugs and cash seized by ALERT, including 113.5 litres of GHB, which police say this is the largest ever seizure in Alberta. (ALERT handout)

CALGARY -- **UPDATE: This story was updated on April 29, 2022 to remove the name of one of the accused who had all of the charges against them withdrawn**

The Alberta Law Enforcement Response Teams (ALERT) organized crime unit in Calgary seized an estimated $3 million worth of drugs and cash from two homes, including what is believed to be the province's largest ever seizure of gamma-hydroxybutyrate, known as GHB.

The busts happened April 27 at two homes — one in the neighbourhood of Killarney and another in Bankview — following a short-term investigation into alleged drug trafficking .

"The GHB seizure of 113.5 litres is believed to be the largest seizure of its kind in Alberta."

The amount of methamphetamine and fentanyl pills seized is also among ALERT Calgary’s biggest busts.

“The totality of what was seized is staggering, and represents a high degree of community harm," said ALERT CEO Supt. Dwayne Lakusta.

"Behind so many doses are crimes committed to feed that addiction; be it property crimes, thefts, frauds, and robberies, and all feeding into social disorder."

In total, ALERT seized roughly $3 million worth of drugs and cash, including:

GHB is colourless and odourless, and is commonly referred to as the “date-rape drug” but is usually abused as a party drug.

In July 2013 Edmonton Police Service seized 106 litres of GHB, which at the time, was believed to be Alberta’s largest seizure.

The investigation is ongoing and additional charges are being contemplated.

A total of 14 drug-related charges were initially laid against three people from Calgary including 30-year Ashley Stanway and 28-year-old Harmandeep Tiwana. CTV News has confirmed all of the charges against the third person were withdrawn.