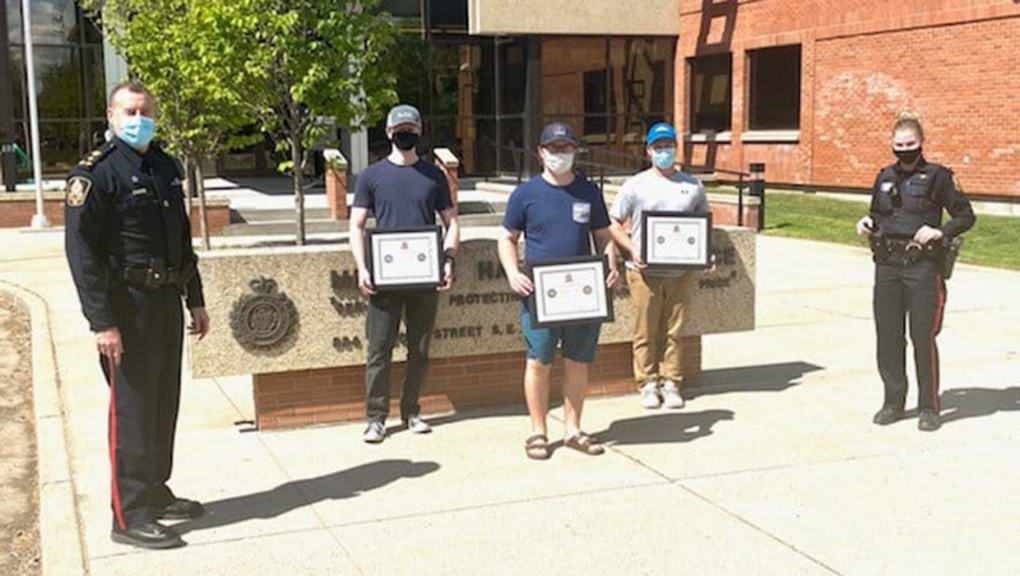 Mitch Halls, Joel Sieben and Kenan Kustra have been recognized by the Medicine Hat Police Service after using golf carts to help apprehend a suspect who was running from police. (MHPS)

CALGARY -- Three Medicine Hat men are being lauded for their efforts in helping police capture a domestic assault suspect on the links.

According to Medicine Hat Police Service officials, Const. Erica Neigum was attempting to arrest a 46-year-old man in the early evening hours of April 23 in connection with a domestic violence investigation.

The suspect was spotted outside of a Medicine Hat home. When Neigum informed the man that he was under arrest, he ran off in the direction of the Medicine Hat Golf and Country Club and the officer gave chase on foot.

A group of golfers spotted Neigum chasing the man and the trio sprung into action to assist the officer.

Using their golf carts, the group attempted to head-off the suspect and force him toward a grove of trees. The man tripped and fell to the ground while attempting to evade the carts and Neigum arrested him without incident.

In recognition of their actions, the MHPS awarded the three golfers — Mitch Hallas, Joel Sieben and Kenan Kustra — with a certificate of appreciation and an MHPS coin.

The suspect's name is not being released in order to protect the identity of the victim. Police confirm the man's charges include failing to comply with a release order, resisting arrest and possession of a controlled substance.