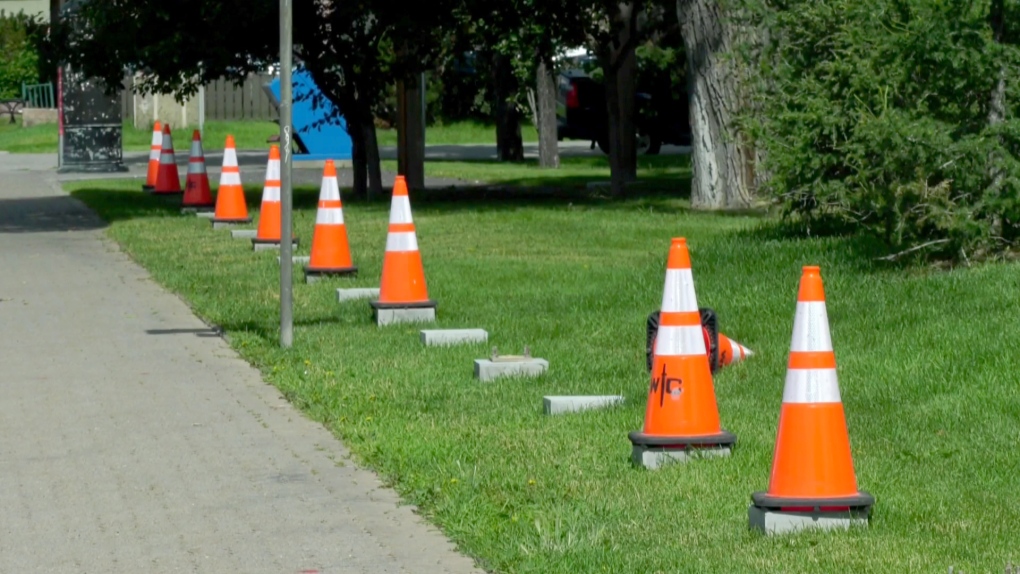 Pylons mark where fencing will go in Mills Park in Inglewood. The fencing is being reclaimed from the Ninth Avenue S.E. bridge which is being replaced.

CALGARY -- The City of Calgary will be recycling and reusing some of the pedestrian railings from the Ninth Avenue S.E. bridge, transforming them into a fence for the recently redeveloped Mills Park in Inglewood.

The old pedestrian railings were salvaged by the city as part of the bridge replacement project which started in 2019. The railings were cleaned, repaired and painted before arriving to their new home in Mills Park.

Mills park is located in the southeast community of Inglewood on Ninth Avenue and 14th street S.E. It is a natural play space, which is an alternative to playgrounds.

The space has a role in self-directed play for children by using their imagination to help with their emotional and social development.

Mills Park has been redeveloped to use natural elements to inspire creative play and connect people and children to the natural elements. This type of space contains some man-made components and structures.

"As we continue to build and nurture our historic communities, it is imperative that we preserve as much character as possible," said project manager Evan Fer. ‪“The old Ninth Avenue S.E. bridge is one of many features that contribute to Inglewood’s intrinsic charm.”

Fer added he’s excited to have been able to reuse some of the old materials from the Ninth Avenue S.E. bridge into a new amenity for the Mills park in Inglewood. The park contains a wooden swing set, a slack-line course and a rain garden.

The City of Calgary’s project team is also working to ensure that some of the old Ninth Avenue S.E. bridge parts live on in Inglewood by: