CALGARY -- Music teacher Sarah Drew's dedication to her craft has been recognized with a prestigious award that comes as she faces the formidable task of instructing and nurturing a love for music in her students during the pandemic.

Drew, a music teacher for 32 years, has been named the recipient of the 2020 Elkhorn Band Director of the Year Award. The award has been handed out by the Alberta Band Association annually since 1974 and the recipient is selected by previous winners.

"I look at the names of other people who have received this as an Alberta-wide award for band directors and it's just people I’ve always looked up to that are on this list," said Drew. "To see my name on there it’s just such an honour."

According to the Alberta Band Association, the award "recognizes the spirit and dedication of individuals and their commitment to band and band education in their arts community."

This is now Drew’s third year teaching at Calgary Girls Charter School, a middle school in the southwest. She gets emotional describing what the last year has been like for her as a band instructor.

When the pandemic hit, traditional band practice couldn't continue since wind instruments weren’t allowed. This year, students in the Grade 6 to Grade 9 school stick with their homeroom cohorts throughout the day.

"It broke my heart in the fall when one of my students asked whether their parent should take their instrument back to the music store," recounted Drew. "I went 'We gotta do something about this'."

Drew has found a way to let students play the instrument they have chosen. She spends her lunch hour with a different homeroom cohort every day and it takes two weeks to get through one rotation.

"This is a way of bringing the community back even if it’s just once every two weeks," explained Drew. "To be with like-minded people and to play their instrument and give them a reason to practice."

During their practice sessions, students must be spaced apart in the classroom with covers placed on the bells of their instruments.

This year, the school has adopted a 'music for all' mentality. Every student, whether they signed up for band or not, is experiencing music. Whether its guitar, hand bells or percussion, Drew takes whatever COVID-friendly instruments are allowed to be played into different classrooms.

"There’s been fire that’s lit that they're surprised they didn’t choose music; All of a sudden they have music forced on them but they had this great experience and now they’re thinking I should buy my own guitar, maybe next year I’ll join band." 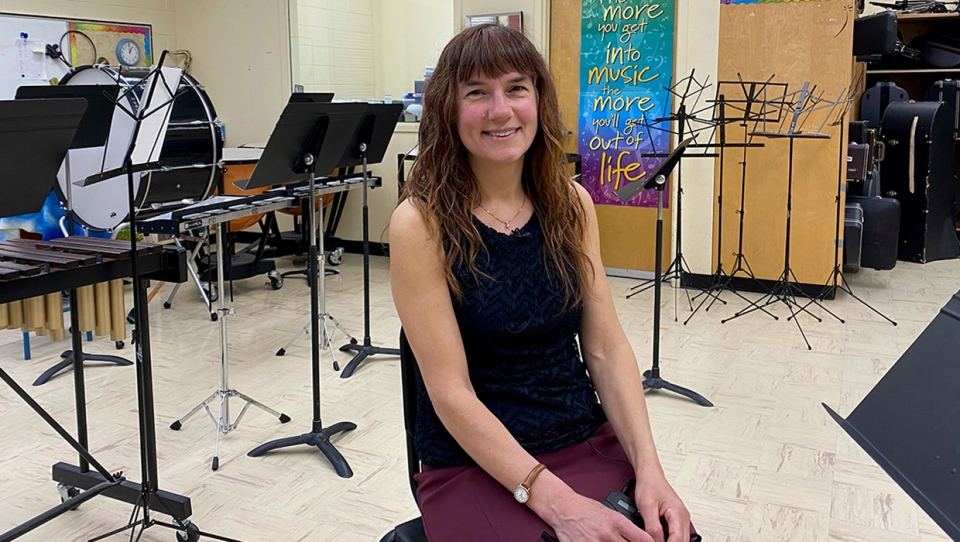 Students say their teacher is truly deserving of the accolades.

"Ms. Drew is incredible," said Bela Moctezuma, a Grade 8 student. "Not only as a music teacher but as an influence to all of us to be better people and to really do our best in everything that we do."

Tuba player Juliette Koski says she is thankful to be able to play whenever possible during the pandemic.

"I love band, I love it so much. It’s my favourite subject," said Koski. "And to be in our band community and keep playing all together and with our amazing music teacher, Ms. Drew. It's just so much fun and I wanted to keep that going."