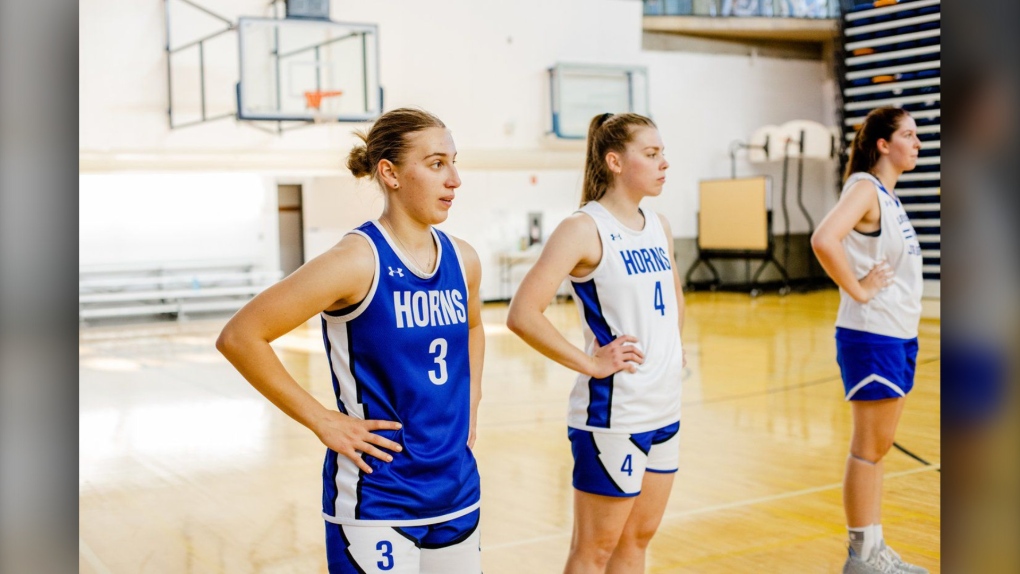 The squeak of their shoes and the thump of the ball on the court feels blessedly normal for Vika Kovalevska and Vlada Hozalova.

Basketball provides a brief sanctuary from the ceaseless undercurrent of tension they feel over what's happening at home in Ukraine.

Hoops also helps ground them in their new life in Alberta, where they play basketball for the University of Lethbridge Pronghorns.

"Basketball helps to distract from everything that has happened around you," Kovalevska told The Canadian Press.

"I just try to focus on the practices, turn off my brain and immerse myself in the world of a fast and dynamic game, where there is not time to think about anything else."

Kovalevska and Hozalova are friends who have played internationally for Ukraine's under-20 women's team. The two guards arrived in Canada in May.

Kovalevska, 23, enrolled in business studies in Lethbridge and will play in Canada West this season.

Hozalova, 24, needs to complete an EAP (English for Academic Purposes) at the university before she's academically eligible to play conference games.

She can still practise with the Pronghorns and play exhibition games.

Hozalova wrote her answers to The Canadian Press in an email.

Her southeast city of Berdyansk, now under Russian occupation, was bombed in February. Hozalova got out when a humanitarian corridor opened.

She still had to get past multiple Russian checkpoints and says she endured a tense interrogation at one.

"Those were the scariest moments of my life. I thought for a second that I might not make it out alive," Hozalova wrote.

"My every day begins with the fact that I watch the news and, unfortunately, the other day, Russia announced that my city is already (in) Russia. I am homeless and have nowhere to go."

Hozalova's mother and 17-year-old brother fled to Germany. Kovalevska's parents and brother are in a relatively safer area in northwest Ukraine, but uncertainty weighs upon her.

"I'm apprehensive about my family. I feel anxiety," Kovalevska said.

"I'm nervous because many bombs arrive on Ukrainian territory every day. Innocent people die. You can't predict which city it will be today or tomorrow."

They haven't heard from their friend Sergei, who serves in Ukraine's armed forces, for six months.

Looking to escape the conflict, the two women obtained their Canadian visas. Using Facebook, they looked for volunteers in Canada who could help them.

Once it became apparent they were headed to Calgary, their contacts there sent query emails to Alberta universities and colleges about basketball.

Within days of their arrival, Hozalova and Kovalevska took a Lethbridge campus tour and met with prospective teammates and university administration.

The university having already established an emergency bursary for current and new Ukrainian students was fortuitous timing.

"When the conflict occurred, we had some students already studying here at the University of Lethbridge," said international executive director Paul Pan. "Because of the conflict, they weren't able to receive money from home to support themselves. They were worried their parents were out of work because of the conflict.

Kovalevska and Hozalova were approved for the bursaries covering on-campus living and tuition for two semesters.

"It wasn't set up specifically for these two," Pan said. "The timing was exactly perfect for them."

Before moving to Lethbridge, the two women stayed with a Russian woman in Calgary.

U Sport rules allow for three international players on a roster. Under basketball eligibility rules, schools can carry players with pro experience on women's rosters, but not on their men's teams.

"Why that is, I don't know, but the professional player rules are different on the women's side than the men's," Waknuk said.

"Both players bring such a high basketball IQ. They understand the game because of their experience of playing at a high level. Both are very competitive, very skilled.

"Their conditioning took a little while to catch up to them, but once it did, the skill, the knowledge, the things that separate them, have come out."

Off the court, the two women are adjusting to life as student-athletes in southern Alberta.

"Thanks to sport, I am here now, and basketball is a part of my life," Hozalova wrote. "I am grateful to everyone near who supports and allows me to do what I love and be safe."

This report by The Canadian Press was first published Oct. 4, 2022.