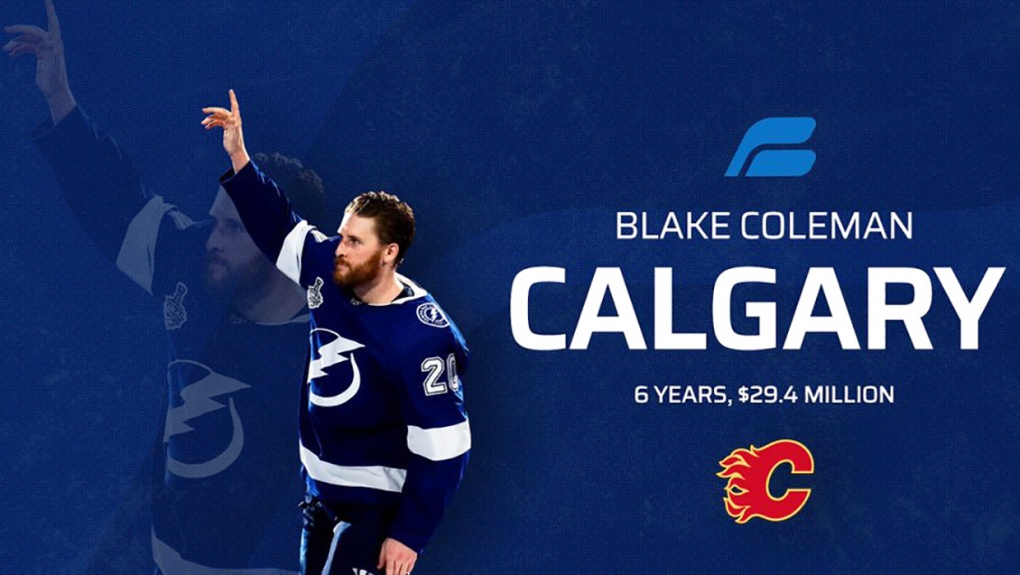 It was a very busy Wednesday for the Calgary Flames.

On a day that featured five free-agent signings, two trades, and an arena deal getting two thumbs up from city council, the most significant and immediate impact will likely be the signing of former Tampa right winger Blake Coleman.

Coming off winning two consecutive Stanley Cups in the town that some people now refer to as “Champa Bay”, Coleman opted to take his talents to Alberta, signing a six year, $29.4 million deal.

“Couldn’t be more excited to join the #CofRed”, Coleman tweeted.

"In big moments Blake is a guy who is trusted by his coaches," Treliving said, in an interview with Ryan Dittrick on the Flames’ website. "He's a big minute-eater, plays against top lines and is able to produce offence. ... He plays in the trenches, but I think his skill is very understated."

From Boston, the Flames acquired goaltender Daniel Vladar in exchange for a third round 2022 draft pick. Vladar, who’s a 195 cm (6’5”), 83 kg (185 lb.) player from Prague, split time last season between Czech hockey, a pit stop in Boston and a stint at Providence of the AHL.

The Flames also used a third round 2022 pick acquired from Toronto to pick up defenseman Nikita Zadorov from the Chicago Blackhawks.

It's officially a done deal!

The #Flames have signed forward Blake Coleman to a six-year deal: https://t.co/1dmaNOMPEC pic.twitter.com/3IdkYMhjEv

The Flames also signed three players to two-way contracts: Swedish goalie Adam Werner, who signed a one year, $750,000 contract, along with two American defensemen, Adam Gravel and Nick Desimone, both of whom received the same deals.

To cap it all off, Wednesday night Calgary city council approved a reworked deal for a new event centre, which is expected to be open in time for puck drop to the 2024-25 NHL season.

Liberal Leader Justin Trudeau has held on to power at a pivotal time in the pandemic, clinching another minority government in the 2021 federal election. CTV News' Decision Desk declared the Liberal minority win after polls closed across the country.

Follow our CTVNews.ca Truth Tracker live blog for real-time analysis, as we keep an eye on instances of voting irregularities as well as election night misinformation spread through social media.

The collision happened at the voting station at the Sunshine Academy at 65 Sunshine St.

New report suggests 75 per cent of dementia cases are undiagnosed, with 'tsunami' of new diagnoses on the horizon

According to a new report looking at Alzheimer’s disease and dementia worldwide, around 75 per cent of all dementia cases are undiagnosed — and due to advancements in treatments and testing, there could be a 'tsunami of demand' for diagnosis in the next few years.

Prince Andrew has been served in the United States with a sexual assault lawsuit by a woman who said his conduct occurred around when his friend Jeffrey Epstein was sexually abusing her, court papers show.