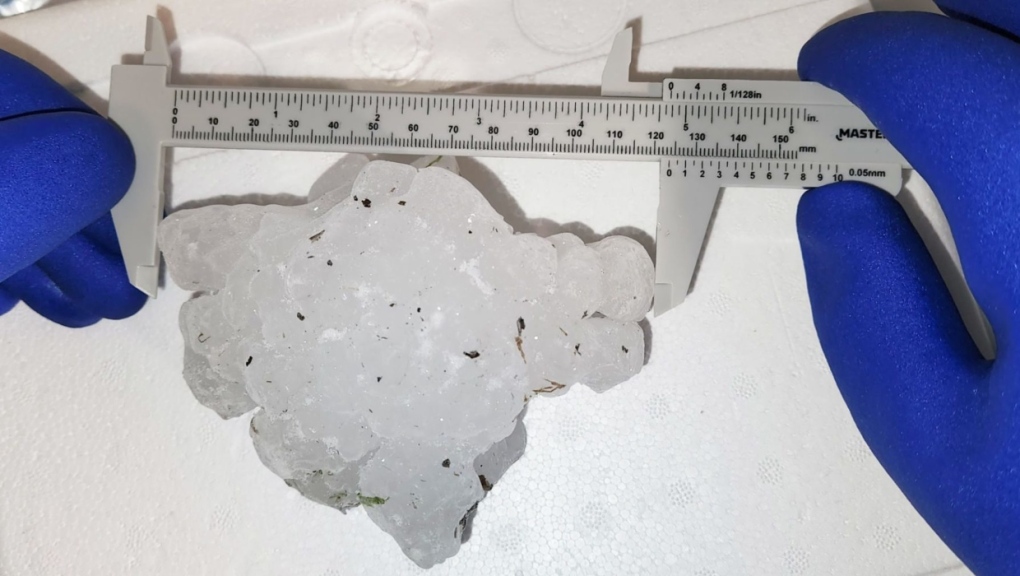 Matt Berry was driving home after golfing Monday evening when cloudy skies quickly turned into a rare storm that dropped hail the size of softballs, caving in his windshield and leaving about 150 dents in his car.

"I was getting covered in shards of glass,'' the graphic designer said as he recalled the moment he pulled over on a country road to take cover while driving from Innisfail, Alta., to his home in Red Deer, Alta.

"The noise was quite loud,'' he said. "It was just crazy. Scary at times, but really it was just shock and awe more than anything.''

The Innisfail, Pine Lake, Condor, Rimbey and Ferrier areas were all hit, the agency said.

Environment Canada had issued a tornado watch hours before the storm, warning large hail might fall later in the evening and cause a dangerous and potentially life-threatening situation. At about 6 p.m., an alert was sent that warned people to take immediate cover.

Videos on social media were posted after the storm of drivers on Queen Elizabeth II Highway – the main route between Edmonton and Calgary – pulled over and covering their heads as hail loudly smashed through their windows.

The more serious injuries included a cut on the side of someone's neck, she said. Three collisions were reported during the storm.

Sara Hoffman, who is a meteorologist with Environment Canada, said the size of the hail was bigger than expected.

"The Prairies are a magical place with thunderstorms, so I was expecting severe thunderstorms on Monday,'' she said.

"We were all kind of thinking the maximum size of hail would be about seven to eight centimetres.''

But a group that researches hailstorms in Canada says a hailstone found in Markerville, Alta., Monday weighs a record-breaking 293 grams.

"Some colleagues and I maintain a national database of really large hail from around the world and before the Monday event, there were only 21 hailstones documented that weigh more than 290 grams,'' said Dr. Julian Brimelow, executive director of the Northern Hail Project.

"As far as we know, this is also the largest documented hailstone to fall in Canada.''

The NHP is very excited to announce that their field team collected a new record large hailstone for Canada on 1 August, 2022! The stone fell near the hamlet of Markerville in Alberta. Press release here: https://t.co/JJ02NDWVc1 pic.twitter.com/AscXQhU2wK

The last record-breaking hailstone in Canada fell on Aug. 27, 1973, in Saskatchewan.

"It looks like the hail didn't lose too much (ice) when it hit the ground,'' he said.

Then it was immediately put into a freezer for testing.

Hoffman said the size of the hail in Monday's storm is rare for Canada.

"Alberta averages 65 reports of severe hail a year,'' she said. "A thunderstorm with hail becomes severe once the hail size is greater than a nickel or two centimetres.''

Hoffman said it's also unusual for the storm to pass through a major highway.

"It takes a lot of things to align for the severe thunderstorms to be so impactful to such a major transport corridor like that,'' she said.

"You've got warm air below cold air and that creates some really turbulent mixing. Winds coming from different directions, at different heights, at different speeds. We had a developing low-pressure system over the centre of the province, so that was our trigger for thunderstorms.''

The Insurance Bureau of Canada said in a email that it may not have estimates around insured losses for several weeks. It encouraged Albertans to take photos of the damages and contact their insurance representative.

Berry said he contacted his on the side of the road immediately after the storm and has already started his insurance claim.

"I also called the tow truck right away and I think I was the second one to get through to them because she was like, 'What is happening because my phone is exploding,''' he said.

The RCMP and fire departments got on location quite quickly, he added.

He then called his mother and reached his home at about 10:30 p.m. that night.

Hoffman said those caught in the storm did mostly what they should have done to stay safe.

"They intuitively knew what they had to do, which was, pull over, stop driving, cover their faces and their heads with their arms, and try to face away from the window where the wind is blowing towards.''

She added the stormy weather conditions are not leaving Alberta for a few days.

"This has been a very active year so there's a lot of energy available for storms.''

This report by The Canadian Press was first published Aug. 3, 2022.