Hundreds of COVID-19 tickets handed out in Calgary, but a majority of them are dropped in court

CALGARY -- Officers with the Calgary Police Service and city bylaw have handed out hundreds of tickets to people breaking public health measures, but a majority of those tickets are withdrawn immediately in court.

Police say they are now working with the province on how to better enforce those measures and Alberta police chiefs are also looking for support to bring in harsher penalties for people who continue to ignore the rules.

"Together, we are working towards addressing some of the issues in the legislation that have caused some challenges when our summonses go to court," reads a statement from Calgary Police.

"In some cases, we have ticketed rally and protest organizers for violating the orders on several occasions, but with limited impact to their behaviour."

As of last week, police and bylaw have handed 367 tickets for failing to wear a face mask and 206 tickets under the Public Health Act. CPS didn't have an exact number, but say most of the tickets that have made it to court have been stayed or withdrawn by the Crown. 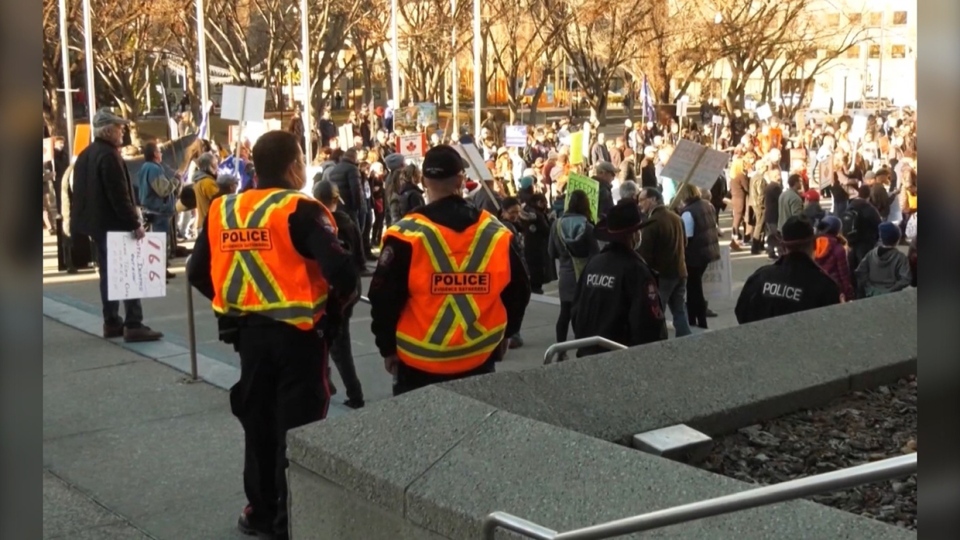 Alberta Justice did not answer questions from CTV News on Tuesday about why so many tickets are being withdrawn.

Answering questions from reporters Monday, the justice minister said the province is working with police services on enforcement.

"I think it is clear that we need to do more to protect Albertans as we tackle the surge of the variants," Justice Minister Kaycee Madu said.

"My hope is that law enforcement, as they have been doing, would exercise powers the provincial government have given to them to ensure public health orders are enforced," he said.

'Afraid to leave their homes'

Marches and rallies have are happening regularly in Calgary and have been for months. Most recently, hundreds of people gathered at Prince's Island Park to protests public health measures.

Councillor Druh Farrell says she's heard from many people who live and visit the area who are intimidated by the large gatherings.

"A lot of people in the area are afraid to leave their homes when this is happening," she said.

"Because as (protestors) arrive and disperse, they're ready for a scrap and they have tiki torches and other symbols of hate."

She wants to see the provincial government support local police in order to enforce the ongoing protests.

"It's getting more and more aggressive, these groups are feeling empowered because we've been unable to respond," she said.