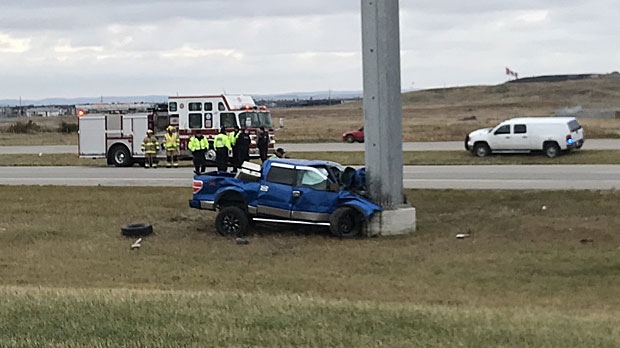 Police closed off a section of Stoney Trail on Sunday morning for a fatal crash just before the 114 Avenue S.E. exit.

Police shut down a section of Stoney Trail in the city's southeast following a fatal crash on Sunday morning.

Emergency crews responded to Stoney Trail, near 114 Avenue S.E., at 11:00 a.m. for reports of a single-vehicle crash.

Police believe the Ford F-150 was travelling north on Stoney Trail when it veered off the roadway and hit the concrete base of a road sign.

A 25-year-old man was the only occupant in the vehicle and was pronounced dead at the scene.

Police say speed does not appear to be a factor in the crash but they are looking into whether drugs or alcohol were involved.

Anyone who saw the crash or the blue, F-150 while it was travelling northbound on Stoney Trail around the time of the crash is asked to contact the Traffic Section office at 403-428-4000 or Crime Stoppers through either of the following methods: