Out with the old CTrains, in with the new

The City of Calgary is phasing out some of its oldest light rapid transit cars that date back to the launch of the CTrain's first line in 1981.

82 of the German built U2 cars were purchased in the 80’s, and around half have been retired.

The challenge for the city when it comes to trying to keep older trains running is that the cars are well past their original service life and replacement parts can no longer be found.

Calgary Transit fleet manager Russell Davies says some of their parts are used on other cars to keep the remaining U2 fleet operational for as long as possible.

“Some of those electronics parts we’re keeping those separate, some of the better parts we find on there if they’ve been through repairs recently," Davies said.

Some trains have even been sold to Edmonton Transit, who use the same style trains, for parts. 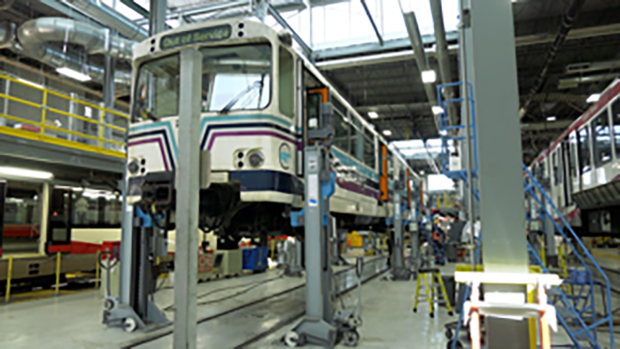 In some cases rust is eating through them.

The cars are almost 40 years old and have recorded upwards of three million kilometres over the course of their life span, carrying millions of passengers around Calgary.

Instead, the majority are cut up into more manageable sized pieces, then sent to a southeast metal recycling yard, where they’re crushed for scrap.

Davies says he likes the look of the new red and white trains and won’t miss the old colour scheme.

“There’s a lot of people that have romantic memories of them I think, but I like the new way it’s gone," he said. "It’s consistent with the city and a little crisper actually”.

It’s an unceremonious ending for light rail cars that were the workhorses for Calgary’s public transit.

The order went in for 69 cars in 2014 and 64 are presently in service on Calgary tracks.

The remaining five should be delivered by December.