Pets, pizza and playdates: how animal shelters are finding new homes for their residents

CALGARY -- As animal shelters fill up, rescue organizations hope to find new homes for pets before the weather gets worse.

That's why, when a litter of puppies showed up at Kayla-Rae Mauruer’s Calgary office Thursday, courtesy of the Alberta Animal Rescue Crew society (AARCS) and Spot Dog Walking, she found herself in the middle of a pet frenzy.

"I wasn’t thinking about adopting before, but it’s always nice to expand the little family," she said..

The organization is offering prospective pet owners "play dates" with animals in need of a home. A play date can be ordered through either AARCS or the Spot Dog Walking app, and anyone arranging a date on Thursday got a free pizza as part of the deal.

"What we are trying to do is just raise awareness and drive adoption for AARCS," said John Minchin, founder of Spot Dog Waking,

"We just want people in Calgary to know that these dogs are up for adoption, not just puppies but dogs of all ages," he added. "It’s a problem that’s never ending here in Calgary." 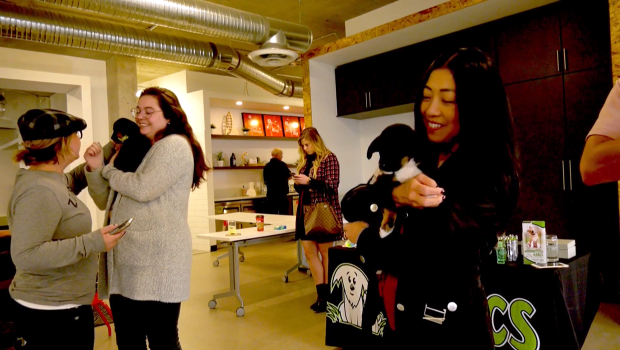 Sadly, it’s a problem that is only getting worse.

Both AARCS and the City of Calgary Animal Services say there has been a spike in pets being surrendered or adopted over the last two years, though the reasons why are hard to nail down.

Some pet owners have said they could no longer afford to keep their animals after losing a job. Others have given their pets up once their family has expanded, including children who may not get along with dogs or cats.

With the region on the cusp of winter, there's a need to locate homes for animals now.

"We’ve already had a few good dumps of snow," said Nicole Janke, with AARCS. "Even though we haven’t got the real cold yet, even the snow brings more calls to rescue dogs out in the rural areas and on our First Nation communities."

The city is also hoping to create additional room in its facilities in case more animals are found roaming the streets once the weather turns.

"We are almost at capacity as we can have for cats in our shelter so we want to get them out and make room for other cats," said Kathleen Dickson with Calgary Animal Services.

Between Oct. 18 and Oct. 21, the city is cutting adoption fees in half.

People can adopt a cat for $81.50 or a dog for $108.50. The animals are already spayed or neutered, vaccinated and microchipped.

The city hopes to find new homes for around 70 cats through this blitz, as well as half-a-dozen dogs.