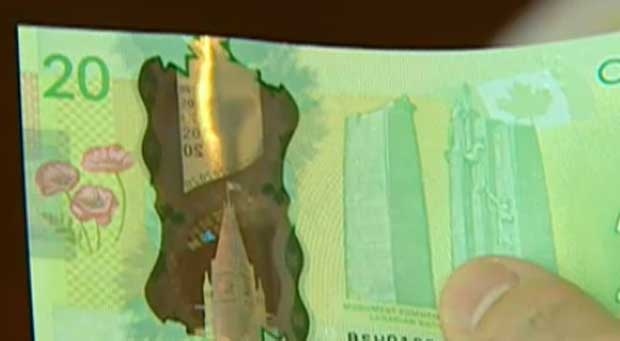 The new polymer $20 banknote features the Canadian National Vimy Memorial, a site in France designed to honour the Canada's sacrifice in WWI.

The Bank of Canada is going to be putting more plastic in your wallet starting on Wednesday and they’re showing off the design right here in Calgary.

New $20 bills will begin circulating this week and the design couldn’t be more appropriate for the time of year.

The new bills feature the Canadian National Vimy Memorial on the back, just in time for Remembrance Day coming up this Sunday.

On the front, the bill features an updated portrait of Queen Elizabeth II.

The design of the note passed through many focus groups, with original designs of Bill Reid's sculptures Raven and the First Men and The Spirit of Haida Gwaii on the back of the $20 bill were replaced with the Canadian National Vimy Memorial.

But the results of Bank of Canada focus groups show that many Canadians don't know such a memorial exists.

"Most of those who participated in the focus groups did not appear to recognize the Vimy Memorial upon first being exposed to the note," an internal report said. "Many did not seem to be aware that the Memorial exists."

The report noted, however, that "most appeared to be aware of the name ‘Vimy'" and its "significance as it related to Canada's military history."

New plastic five and ten dollar bills will be out next year.

With files from CTVNews.ca