At just over two weeks old, the Calgary Zoo’s newest king penguin chick is already growing strong. Its parents are a same sex penguin pair, Arthur and Nero, who share all the responsibilities of incubating, feeding and protecting the zoo’s newest addition.

Four-year-old Nero and 17-year-old Arthur, both male king penguins, have been very close for months, and now the pair take parenting duties seriously.

“The chick is growing really, really well. So they’re definitely stepping up to the challenge,” explained Dr. Malu Celli, a curator at the zoo.

“They have been swapping [the egg] backwards and forwards. They incubated for nearly two months and now it hatched and they are both sharing the parental responsibilities, which is awesome.”

Experts at the zoo don’t know the extent of the relationship the two penguins have. They haven’t shown any type of sexual bond, but it’s obvious the two are a close pair.

“We’ve never seen copulation between the two and we might never. Maybe next year when Nero is a fully-fledged experienced male, he might pick a female from the group and pair with her,” Dr. Celli said.

This has been an unusual year for the Calgary Zoo’s penguin colony. They’ve seen more birds than ever and there have been different penguin pairings than other years.

What isn’t unusual, however, are same sex penguin pairs in other zoos. 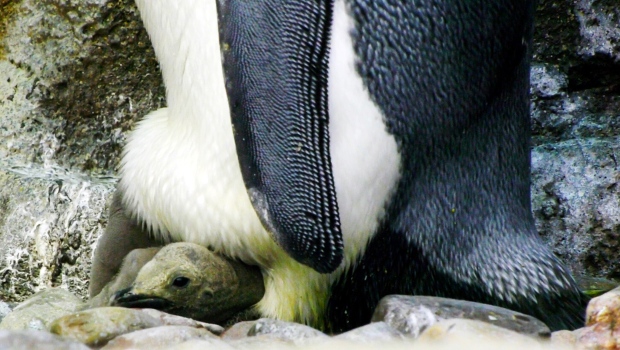 In early August, Zoo Berlin in Germany announced two of its male king penguins had adopted an egg together. Incubation takes around 55 days, but if all goes well, it would be the zoo’s first penguin born to two fathers.

And the ZSL London Zoo has had gay penguin couple Ronnie and Reggie for years now, with the pair working together to hatch an abandoned egg in 2015.

Calgary zoo experts aren’t ready to label the pair just yet, other than decent parents.

“For us, it doesn’t matter who they are," Dr. Celli said. "If they’re related to Diana (the female king penguin who produced the egg) or what sex they are, we just care that they’re doing a great job parenting together."