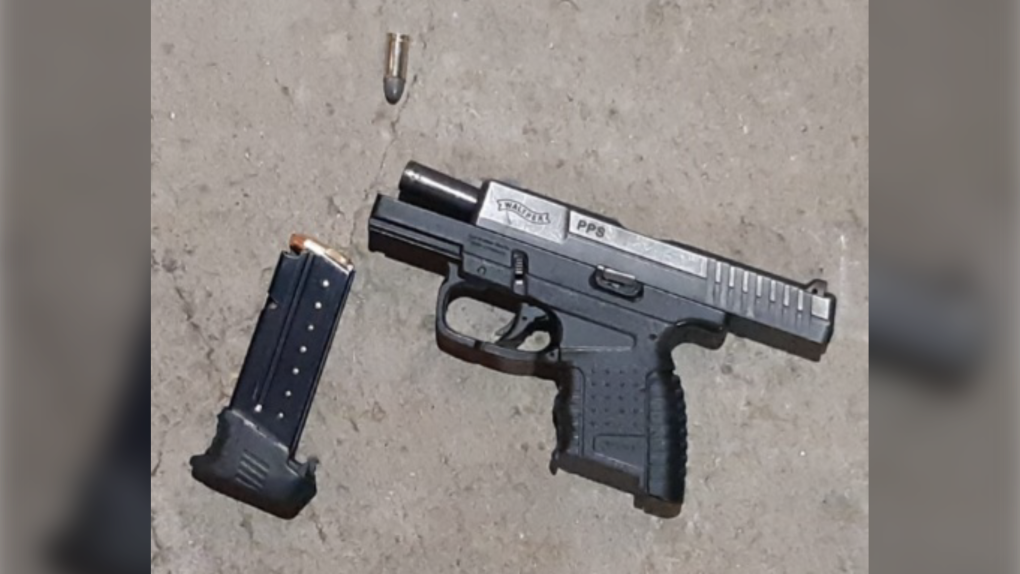 Police seized a restricted handgun during an investigation on Nov. 23, 2019. (Supplied)

CALGARY – Two men are facing a long list of charges in connection with an investigation into gang activity that began in September.

Officials say the operation, which targeted individuals in high-risk lifestyles, located a white, 2018 Ford Fusion parked at a truck stop in the 4900 block of Barlow Trail S.E. on Nov. 23.

Police say two of the occupants of the vehicle were wanted in connection with the operation as well as three other unknown individuals.

Officers managed to arrest three of the occupants following a brief struggle, but two of the suspects managed to escape.

A subsequent search of the vehicle uncovered:

Two of the men taken into custody have been charged while the third, a 17-year-old male, was released without charges.

Latef Reakwon Tag El Din, 23, of Calgary, is charged with eight weapons charges including carrying a concealed weapon, possession of a loaded restricted firearm and possession of a weapon contrary to a court order.

He was also charged on eight outstanding criminal warrants.

Police say these arrests wouldn't be possible without the support of members of the public.

"We are proactively targeting individuals involved in a high-risk criminal lifestyle who have the potential to commit violence in our community," said Staff Sergeant Greg Cooper of the CPS Guns & Gangs Unit. "While we continue to use multiple police resources to target these individuals, the continued support of the community is crucial in helping us to hold these individuals accountable."

Anyone with information about firearms offences is asked to call police at 403-266-1234. Tips can also be submitted anonymously to Crime Stoppers through either of the following methods: