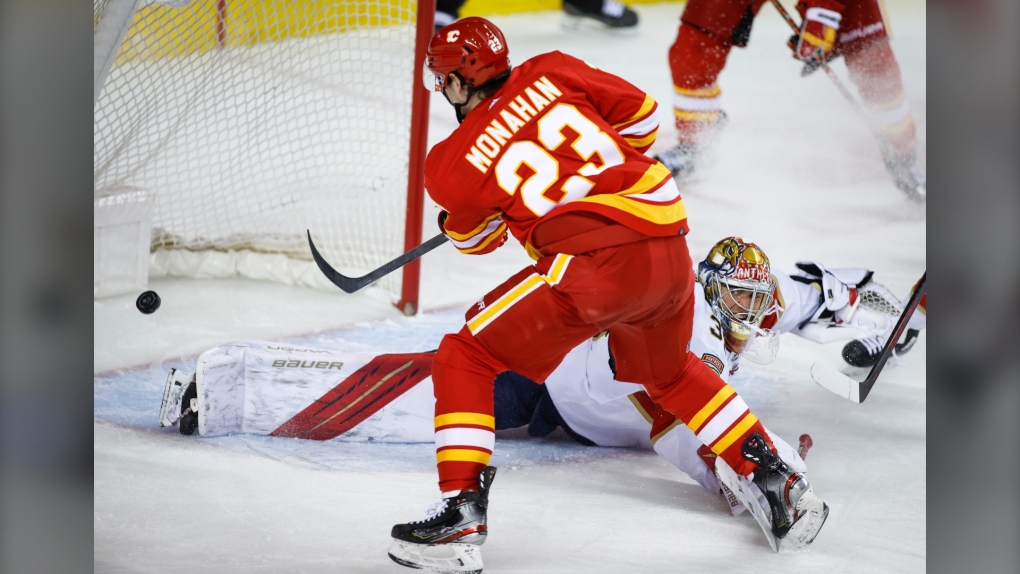 After spending most of the season on the Calgary Flames' fourth line Sean Monahan finally found his scoring touch.

Monahan's first two-goal game of the season helped the slumping Flames to a surprise 5-1 victory over the NHL-leading Florida Panthers on Tuesday.

"When the puck goes in, you get some more confidence in your game and you want to continue that," said Monahan, a three-time 30-goal scorer, who entered the night having only scored four times. "Obviously I want to produce and I've got to keep working at that."

After scoring a power-play goal on a deflection at 16:03 of the second period to make it 3-1, Monahan put the game away in the third, making it 5-1 at 6:43, taking a drop pass from Johnny Gaudreau and neatly beating Panthers goaltender Spencer Knight.

"Great to see him get rewarded," said Gaudreau, who had his first four-assist game ever on home ice and just the second of his career. "When you find him in the slot, he puts the puck in the net. He made my job easy."

Flames coach Darryl Sutter emphasized that it's not just the two goals, but how he scored them.

"One's a face-off goal. He wins the draw then tips it after Johnny shoots it. It's a power play so you've got to win your draws," Sutter said. "The other goal he scored, it's a line change, (Elias Lindholm) comes off and Sean goes on, but he kills the play inside our own blue line which creates the opportunity going the other way. He made two really good plays."

Matthew Tkachuk said that Monahan, who has often been the target of fan scorn, plays a bigger role than fans realize.

"He does a lot of little things that most people don't notice," said Tkachuk, who had a goal and two assists. "He's really solid for us on the power play. We're out there the most with him and he's great on draws, great recovering pucks. He's a big time threat that opens up some stuff for the rest of us."

The power play was key for the Flames striking twice on three opportunities after entering the game 0-for-10 during the losing streak.

Rasmus Andersson, with his first of the season, and Blake Coleman also scored for Calgary (18-11-6), which snapped a four-game losing streak and won on home ice for the first time since Nov. 29.

The Flames entered the night 2-7-1 in their previous 10 games.

"It's difficult sometimes when you're going through skids like that to wake up, come to practice," said Gaudreau. "But after a big win like that, guys are excited. You're always excited to be at the rink, but it's a different attitude when you're winning games."

Sam Bennett scored the lone goal for Florida (26-8-5), which had its four-game winning streak and nine-game points-streak (8-0-1) snapped. The Panthers are just 5-5-5 on the road.

"Didn't really come prepared to play here early. That's on me," said Panthers interim coach Andrew Brunette. "We weren't prepared to pay the price tonight. It's going to happen, games like this."

The next outing for both teams will be in Edmonton with the Panthers' second stop on a five-game road trip taking place on Thursday. Calgary isn't back in action until Saturday at Rogers Place.

"As nice as it would be to go 82-0, you have ups and downs throughout the season, so it's just about how you respond," said former Flame Ryan Lomberg.

Markstrom, who has given up four or more goals in four of his previous five starts, made 28 stops to improve to 13-8-5.

Starting for the first time in eight games, Knight made 26 saves. His record falls to 7-5-2.

"Early on we weren't much help. And then I thought he really got his game going in the second period.," Brunette said. "He gave us a chance to be right there, 2-1 hockey game, and we self-destructed."

Bennett, in his first game back in Calgary scored 12:36 into the second to briefly cut Florida's deficit in half.

Bennett was traded to Florida last season after logging 402 games with Calgary over six seasons. He's been a revelation since joining the Panthers, scoring 22 goals in 40 games.

Notes: Tkachuk has 13 points (six goals, seven assists) over his last eight games... Gaudreau's only other four-assist game was in Nashville on Feb. 21, 2017... It was the first time this season Florida did not get a point from a defenceman... Mason Marchment returned to the Panthers lineup for the first time since Jan. 1. An assist gives him a five-game point streak..

This report by The Canadian Press was first published Jan. 18, 2022.

BREAKING | Jason Kenney steps down after 51.4 per cent approval in leadership review

The second strike in CFL history is over. The CFL confirmed Wednesday night that it and the CFL Players' Association reached a tentative collective bargaining agreement.