A group of hikers from Calgary came across a unique find while exploring in the Alberta Rockies last summer.

At the start of August 2021, James Crawford, along with two friends, hiked Mount Smutwood, in Kananaskis Country, west of Calgary.

“Near the top of the mountain we saw a lot of beautiful sights,” said Crawford, an avid hiker. “(There was) also the remains of a glacier up there, so we went to check that out.”

As they got closer, the group came across something unexpected.

“There was a moose antler. It appeared to have just thawed from the glacier,” said Crawford. “And we looked it over and it wasn't just a shed, there was some skull attached, and some jaw and vertebrae.”

The group left the bones where they were, making sure not to disturb what they'd found.

“(In the parks) just take pictures and leave only footprints,” said Crawford.

According to the province, antlers or any other naturally shed wildlife parts can only be kept without a special permit if they were found outside a national or provincial park.

In national parks, collecting wildlife like berries, fossils or even antlers is illegal. The government says any discoveries should be reported to the nearest park office. 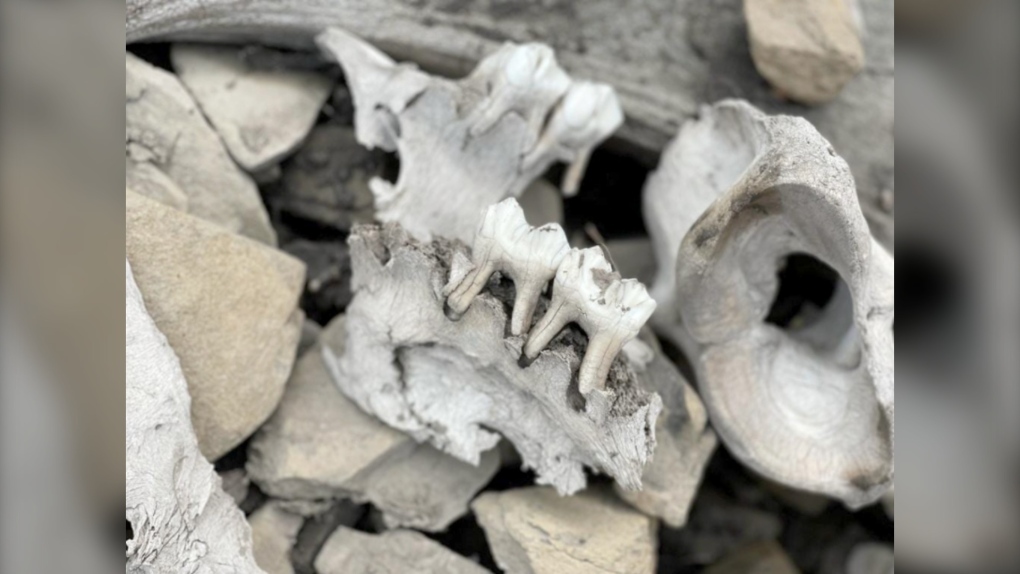 A piece of jawbone and teeth discovered near the antlers. (Courtesy James Crawford)

When it comes to fossils, the Royal Tyrrell Museum says a discovery should be photographed and the location properly documented then reported to officials and left alone.

“It was surprising,” said Lisa Kolias, who was there when the bones were found. “We were excited and shocked to see an antler and the remnants so high up. (You) don't generally see wildlife up that high.”

Kolias described the bones as old and spongy, yet still pristinely intact.

Crawford contacted officials to report the moose remains but he says by the time researchers went to collect them a couple weeks later, the antlers were gone – taken either by animal or human. The other fragments of the moose were still there.

“It’s still important to (the researchers) and so they would like to have it,” said Crawford.

Crawford has put a call out on social media to see if anyone knows the whereabouts of the antlers, and says he would be happy to connect them with the appropriate researchers.