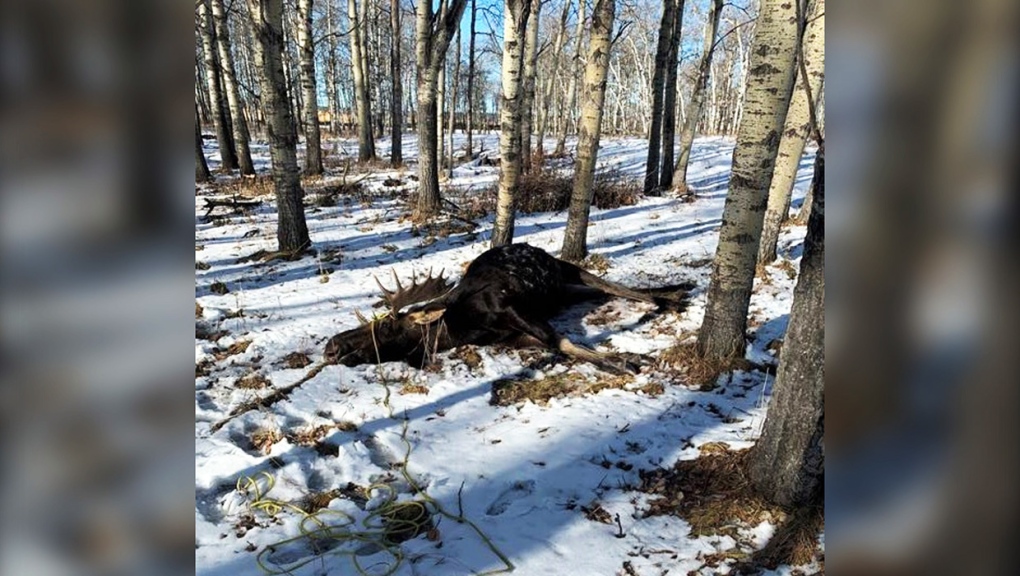 A dead moose was discovered northwest of Cochrane on Wednesday afternoon.

CALGARY — Alberta Fish and Wildlife officers are seeking help from the public to learn who shot and left a dead bull moose on private land northwest of Cochrane.

The moose carcass was found in the Westbrook School area, near Range Road 43, around three kilometres south of Bottrel on Wednesday. Officials believe it was killed with a high-powered rifle.

Officers located rifle casings along Range Road 43. A rope was also wrapped around the moose’s antlers, suggesting that those responsible had knowingly killed, then abandoned the animal.

While there is a legal hunting season in the area where the moose was shot, officers believe this moose was hunted unlawfully, possibly by someone without a license.

It’s also unlawful to waste the meat. Officers believe a second, tagged moose was shot and killed, then dragged to Range Road 43 and loaded onto a tractor, because the back of a hunting tag was discovered.

Both were believed to have been killed the afternoon of Nov. 13.

A red, four-door Jeep with a black top was seen in the area.

Anyone with information is asked to contact the Report a Poacher line at 1-800-632-3800 or submit an online report at alberta report a poacher.

Tipsters may remain anonymous, and persons who provide information that leads to charges being laid may be eligible for a cash reward.