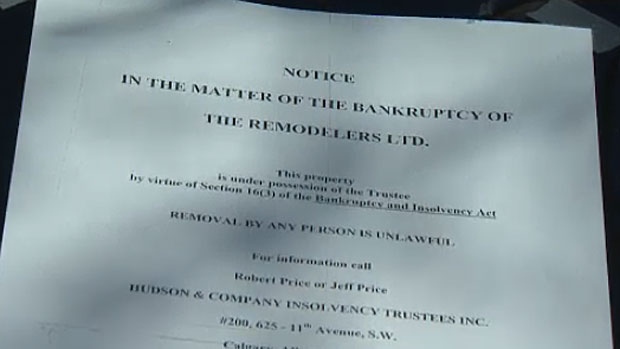 Service Alberta says that 24 former customers of a bankrupt contractor have come forward, saying they paid for renovations that were never completed.

A provincial agency says that more customers of a bankrupt Calgary contractor are coming forward, saying they too paid for renovations on their homes that were never completed.

The company involved, the Remodelers Ltd., which produced the show ‘Remodel It’, filed for bankruptcy in late October.

At that time, over a dozen families said they had paid for renovations on their homes that were never completed and, in some cases, made their homes hazardous to live in.

Now, Service Alberta says that 24 former customers have come forward, saying that Bruce Hopkins, the former owner of the Remodelers, collected huge amounts of money from them before starting any work.

The agency hasn’t yet launched an official investigation or laid any regulatory charges against Hopkins, but they say they are examining their files and working closely with the Calgary Police.

Earlier this week, creditors, homeowners, and former employees had their first meeting with Hopkins and his trustees to oversee the liquidation of the company’s assets.

For consumer information and complaints, visit the Service Alberta website.