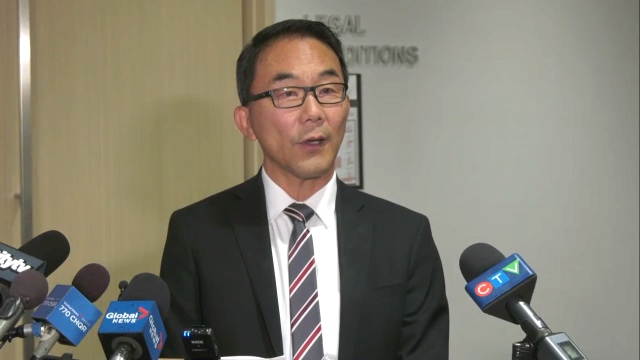 CTV News has learned the complainant at the centre of a sex assault allegation involving Ward 4 Coun. Sean Chu filed a statement of claim against him in 1999 for physical and mental injuries and loss of income and expenses she suffered as a result of the alleged incident.

The court documents outline more details of the events leading up to Aug. 12, 1997. This was the night Chu met up with the complainant while on duty as a police officer at a restaurant when she was 16 years old. He was never criminally charged but was found guilty of one count of discreditable misconduct for caressing her leg and reprimanded for five years.

During a press conference last month, Chu said that he "didn't recall" meeting the teen prior to the encounter on Aug. 12.

In the statement of claim, the complainant alleges she "first met Constable Chu in the Spring of 1994 or 1995 when she was questioned by him in regard to a complaint that she had committed an assault," and that she also "met him in her neighbourhood two or three times after that, while he was on duty, and engaged in small talk with him."

Furthermore, the court documents show that on Aug. 9, 1997, she had a "chance meeting with him, outside a pub, while he was on duty." The complainant alleges he "gave her a hug" and told him "she had just finished summer school." The pair then exchanged pager numbers and agreed to meet sometime in the next few days for coffee.

In a statement to CTV News on Saturday, Chu says, "Statements of Claim contain unproven allegations and no court has made a ruling on these. The incident of 1997 was thoroughly investigated multiple times, and all of them came to the same conclusion".

Chu has admitted to engaging in what he calls consensual sexual foreplay with the teen on the night in question in 1997 at his home. However, he has maintained he thought she was older because he says they met at the Kings Head Pub, a licensed establishment, during a routine walk-through while on duty.

Chu has denied the allegations of the CPS handgun, saying on Oct. 21, "this is categorically false, and I was questioned on this point in the polygraph. In fact, I left my service weapon in my locker at work as was my usual practice."

The complainant also states that in the following days after Aug. 12, "Constable Chu left messages on her phone, apologizing, and asking to see her again. She returned none of the calls."

The presiding officer during the disciplinary hearing, Insp. Debbie Middleton-Hope said she felt the girl's account was inconsistent and that the girl "had difficulty in recalling pertinent details. I find her evident not to be believed."

Middleton-Hope stated that several witnesses thought the girl appeared to be 19 to 21 years old and said, "I have no evidence before me that indicates Constable Chu was aware of this fact."

However, according to Canadian law, a 16-year-old can't consent to sex with a person in a position of authority over them, like a police officer.

In addition to the statement of claim, Law Enforcement Review Board documents from 1999 also show that the complainant had been appealing the matter over the course of nine years. She also had filed a complaint against the officers who investigated her allegations, claiming there was misconduct and a "general coverup."

One of the complaints was that she agreed to a polygraph test, but when she called two days before the scheduled date and time, it was cancelled without reason and never rebooked by CPS. The decision in the LERB document from 1999 indicates her complaints against the officers were dismissed.

CTV News confirmed that Chu did not file a statement of defence, and he was noted in default.

The other defendant on the Statement of Claim is Christine Silverberg, the Police Chief at the time of the alleged sex assault incident. She filed a statement of defence and then later made an application to get the action against her dismissed, which was granted.