'More pain:' Some Broncos families angry over request in court to delay lawsuit 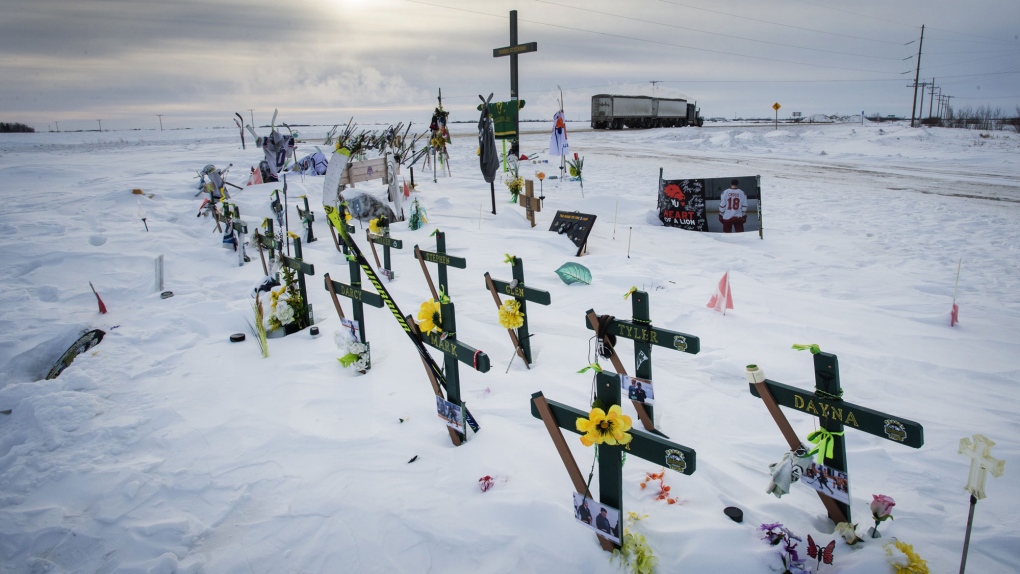 Lawyers for a proposed class action waiting for certification plan to ask a judge Friday to delay another lawsuit filed by five of the Humboldt Broncos victims' families until that's done. (file)

CALGARY -- A battle between lawsuits related to the Humboldt Broncos bus crash is to be heard in a Regina courtroom this week.

Eleven lawsuits were filed after the crash on April 6, 2018. Sixteen people died and 13 were injured when the driver of a semi-truck blew a stop sign and drove into the path of the junior hockey team's bus near Tisdale, Sask.

Lawyers for a proposed class action waiting for certification plan to ask a judge Friday to delay another lawsuit filed by five of the victims' families until that's done.

The possible delay has some of the families frustrated.

"We want to put certain pieces of this behind us. When they get dragged out longer and longer, it just makes it harder and harder. It causes more pain," said Chris Joseph, a former NHL player from St. Albert, Alta. His 20-year-old son, Jaxon, died in the crash.

The proposed class action so far includes the families of 24-year-old Dayna Brons, the team's athletic therapist from Lake, Lenore, Sask., who died in hospital after the crash, and injured goalie Jacob Wassermann, 21, from Humboldt, Sask. The suit names the Saskatchewan government, the inexperienced truck driver who caused the crash and the Calgary-based company that employed him.

Vancouver lawyer John Rice said the request for a stay, or delay, is about fairness.

"In situations where numerous claimants are harmed from the same event - and where the legal findings in one proceeding could impact all the others - the court needs to strike a balance between the competing interests of individual litigants to ensure that the most efficient and just process is adopted," Rice said.

"In these awful circumstances, in this application, the court is being asked to exercise the 'least-worst' option, which is to press pause on the progress of one action until the application for certification is heard."

Kevin Mellor of Regina, lawyer for the other lawsuit, said a delay would put his clients' claim at risk. He represents the Joseph family as well as the families of Adam Herold, 16, of Monmartre, Sask.; Logan Hunter, 18, of St. Albert, Alta.; Jacob Leicht, 19, of Humboldt, Sask.; and assistant coach Mark Cross, 27, from Strasbourg, Sask. They all died from the crash.

That lawsuit, in addition to naming the Saskatchewan government, the driver and his employer, also lists the bus company as a defendant.

Mellor said Jaskirat Singh Sidhu was sentenced to eight years in prison for causing the crash, but could be deported to India before their lawsuit gets to trial.

"If the class action is going to delay ... they're going to miss out on material evidence because this guy will be deported," Mellor said.

Co-counsel, Sharon Fox, said their clients shouldn't be punished because they were first to file a lawsuit.

"We filed our claim in July 2018, three months after the crash happened," Fox said.

"We have been at this for almost two years ... They're trying to hold us back, put us on the sidelines, so they can catch up. We're saying that's not fair and that's going to impact our client's ability to prove our case."

Their clients also don't want to put their healing on hold any longer, she said.

An affidavit from Herold's father, Russ Herold, was filed in advance of Friday's hearing.

"I feel I will suffer psychological harm if my lawsuit is delayed," he says in the document.

Lawyers for the Saskatchewan government recently argued in court that, because of the province's no-fault insurance, it should be struck as a defendant from the class action. A judge has not yet ruled on that application.