An online fundraiser meant to cover the costs of a cross-country protest against vaccine mandates for truckers has surpassed $4 million.

The GoFundMe organized by western separatist Maverick Party organizer Tamara Lich has exploded in recent days as the first trucks of the Freedom Convoy 2022 left the BC coast bound for Ottawa on January 29.

However, on Tuesday, GoFundMe announced it has frozen access to the money.

The convoy held rallies in Calgary and Medicine Hat Monday before rolling on to Regina.

The protest is primarily aimed at Canada's mandatory vaccination requirements for truck drivers which require the unvaccinated to quarantine for 14 days after returning to Canada from the US. The same rule applies in both Mexico and the United States.

"We have a supply chain crisis right now that's helping fuel inflation," Conservative leader Erin O'Toole said. He also voiced his support for vaccination as the best - but not the only - way out of the pandemic. "Prioritizing vaccines, prioritizing public health, but (also) reducing pink slips and getting goods on shelves."

Former Brooks mayor and current MP Martin Shields posted a video from in front of the parliament buildings today saying he looks forward to meeting with the truckers when they arrive in Ottawa.

The prime minister shot back today, accusing conservative politicians of stoking fears, saying vaccination is the only way out of the pandemic.

The Canadian Trucking Alliance representing carriers and suppliers condemned the protest saying it's ineffective at resisting policy adding the vast majority of truckers - all but 26,000 out of 160,000 - are vaccinated anyway.

The Private Motor Truck Council of Canada was more sympathetic to the convoy's top line concern.

"We are in favour of vaccines. What we are not in favour of is legislating people out of work," said council president Mike Millian.

But the organizations' robust fundraising also raised questions of transparency. A GoFundMe representative said in a statement Monday that they require transparency and a clear plan for how donation money will be spent.

The company is working with Medicine Hat-based Tamara Lich on verifying her distribution and management plans and are holding the money in the mean time.

An email address set up to transfer money to the convoy appears to direct deposit to an account in Lich's name. She did not respond to interview requests from CTV News.

The Maverick Party said they are in no way associated with the Freedom Convoy, but leader Jay Hill said they support her initiative in principle and have received assurances steps are being taken to safeguard the considerable fund.

"She has sought and gotten volunteers from the legal profession, from accountants that are going to ensure that all the money that is donated to their cause is properly accounted for. So I take Tamara's word," said Hill.

Hill added that he favours vaccination and has three shots himself, but his party believes in freedom of choice. 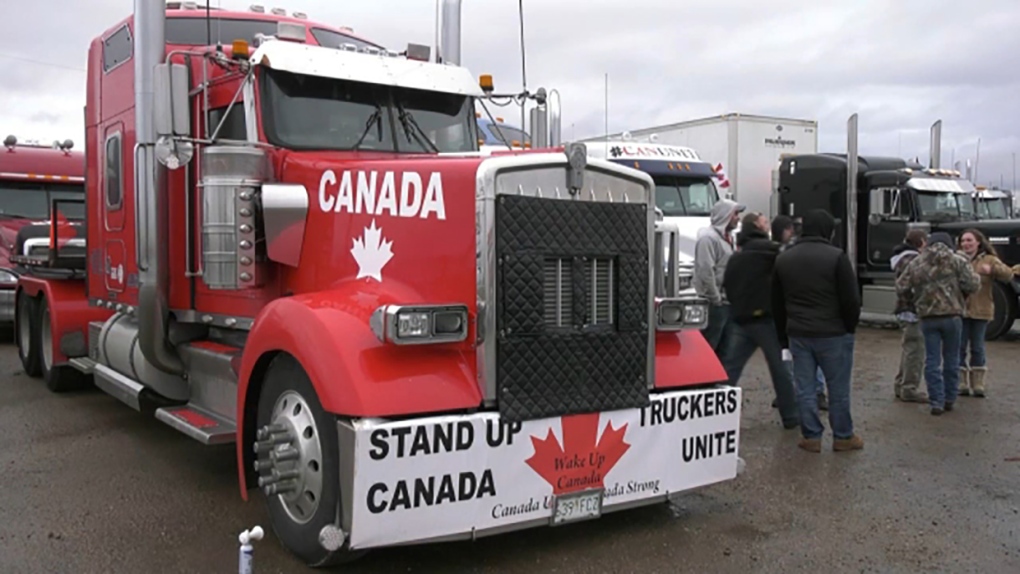 The truckers left British Columbia on the weekend on a cross-country journey to protest federal vaccination mandates faced by truckers crossing the border who otherwise face lengthy quarantine periods when they return to Canada.

Earlier Monday, hundreds upon hundreds of people gathered near a southeast Calgary truck stop Monday morning to show their support for a convoy of truckers heading to Ottawa.

'Freedom Convoy 2022' opposes mandated vaccinations, mandated isolation for unvaccinated drivers who return to Canada and other restrictions imposed on the trucking industry in response to the COVID-19 pandemic and the rampant spread of the Omicron variant.

The convoy, which is travelling across Western Canada, rolled into Calgary late Sunday. An estimated crowd of more than 1,000 supporters lined the streets when the trucks began moving Monday.

Cars have been steadily heading out for well over an hour. Hard to see from this video, but there are easily more than a thousand people here. This area is packed. #YYC https://t.co/J8ZwI2SuQ2 pic.twitter.com/S5LdOf7Yah

The CTA also condemned the use of a convoy to oppose government policy, claiming displeasure should be addressed through Parliament Hill gatherings or discussions with local MPs, instead of protests held on public roadways, highways and bridges.

Police: Buffalo gunman aimed to keep killing if he got away

The white gunman accused of massacring 10 Black people in a racist rampage at a Buffalo supermarket planned to keep killing if he had escaped the scene, the police commissioner said Monday, as the possibility of federal hate crime or domestic terror charges loomed.

The Ontario election leaders debate is happening on Monday night. Here's how to watch it live.

'Aquaman' actor Amber Heard told jurors in a defamation case on Monday that she filed for divorce from Johnny Depp in 2016 because she worried she would not survive physical abuse by him.

Moscow suffered another diplomatic setback Monday in its war with Ukraine, with Sweden joining Finland in deciding to seek NATO membership, while Ukraine's president congratulated his soldiers who reportedly pushed back Russian forces near the border.