More than 28 per cent of Calgary's downtown office space is vacant: CBRE According to data from CBRE, more than 43 million square feet of downtown office space in Calgary is vacant.

CALGARY -- Calgary is leading the country when it comes to office vacancies, a new report indicates.

The statistics, from the CBRE Group, found that the city's downtown office vacancy rate inched up to 28.7 per cent in the third quarter of 2020, up from 27 per cent last quarter.

It's the highest among Canada's major cities and almost 10 per cent higher than the vacancy rate in the next highest centre, in Halifax, N.S. (19.7 per cent).

CBRE Canada says much of the country is feeling the impacts of the COVID-19 pandemic in the sector as 2.4 million square feet of space became available throughout the country.

"Without question, Canada's largest office markets are experiencing a shift in demand and businesses continue to weigh the long-term impact of COVID-19 and the ability to work from home on their operations," said CBRE Canada vice-chairman Paul Morasutti in a release.

"That said, the third quarter numbers are similar to what was seen during previous recessionary events and do not yet reflect anything more significant than that at this juncture."

The only centre that didn't experience an increase in its vacancy rate was Edmonton. The report shows it dropped from 19.7 to 19 per cent.

Some of the factors that weighed heavily on Calgary's market was a continued lack of demand from the energy sector, something that CREB expects will force the vacancy rate up even further over the next while.

Another major increase to the vacancy rate can be attributed to the return of the fully vacant, 597,000-square-foot Nexen building to the downtown inventory.

"We expect to see a further increase in downtown product available for let as oil and gas companies begin to evaluate the prospects of potential mergers and acquisitions," the group said.

According to the latest data, 12,455,879 square feet of Calgary's total leasable downtown office space is empty. 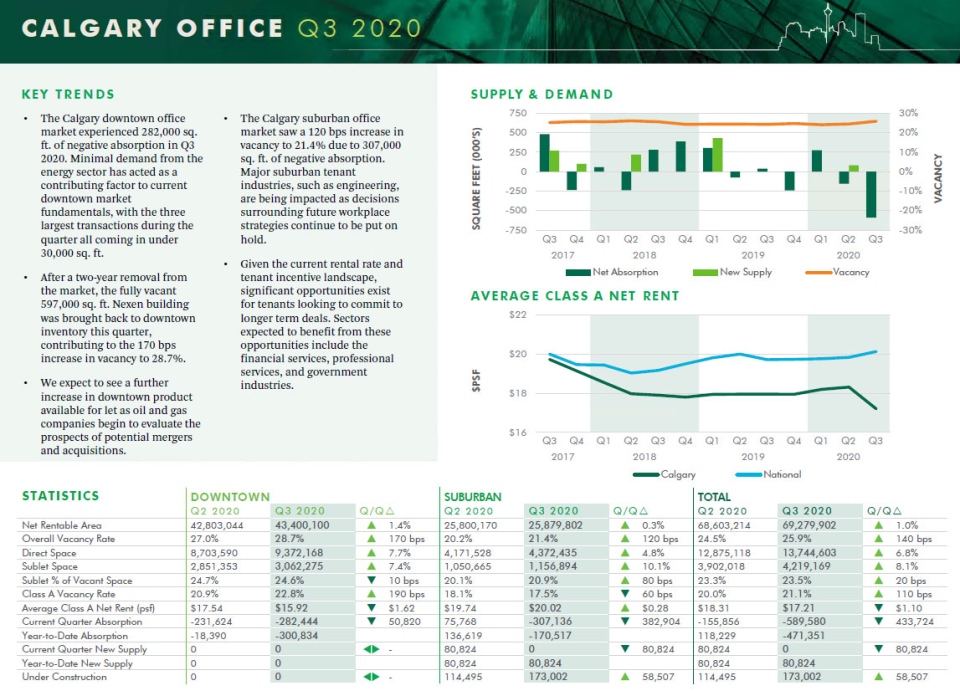