More than 30 kilograms of cocaine seized at Alberta-Montana border 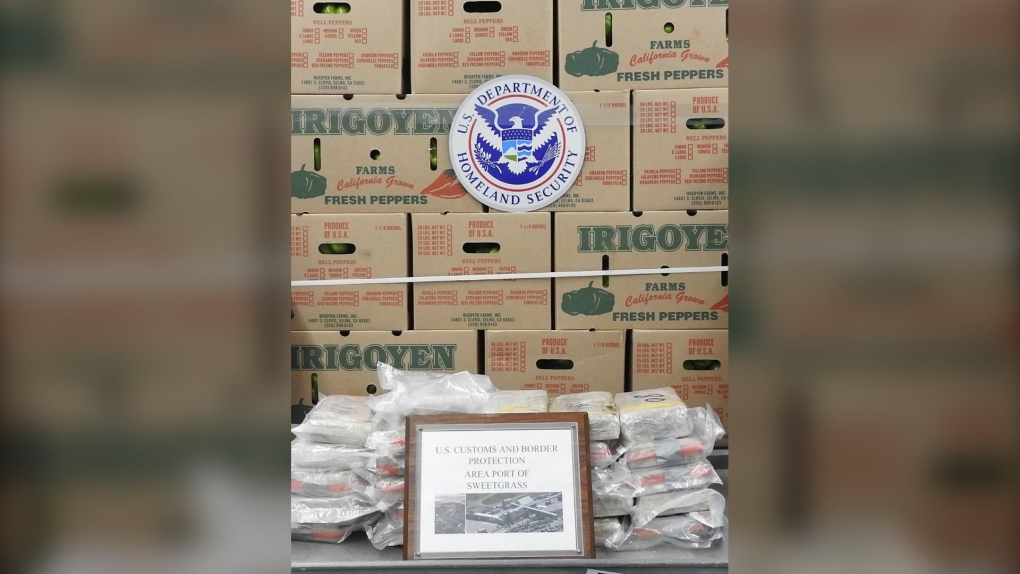 U.S. Customs and Border Protection stopped a Canadian woman who they say was trying to bring more than 30 kilograms of cocaine across the Alberta-Montana border. (Supplied)
CALGARY -

A Canadian woman has been caught attempting to import a significant quantity of cocaine into the country, U.S. border agents report.

The suspect, who was driving a commercial truck loaded with watermelons and peppers, attempted to cross into Canada at the office in Sweetgrass, Mont. on July 29.

Upon further inspection of the truck, U.S. Customs and Border Protection (CBP) officers discovered a number of bags hidden among the cargo.

The substance inside the bags tested positive for cocaine, officials said. The total amount of drugs seized was 31.5 kilograms.

"Utilizing high-tech tools, our frontline CBP Officers used a combination of their training and experience to detect and seize 69.5 pounds of cocaine in the cargo environment," said area port director Jason Greene, Sweetgrass Port of Entry, in a release.

"The ability to facilitate lawful trade and travel while sustaining a focus on enforcement, is critical to our border security mission."

Charges are pending against the suspect, who has not been identified.

Health Minister Patty Hajdu said she expects a submission from Pfizer in the coming weeks for the use of the company’s COVID-19 vaccine in children ages five to 11.

A Canada-wide warrant has been issued for a man who police say fled the Toronto area after allegedly killing an Ontario couple that disappeared earlier this month.

PM Trudeau to name new cabinet in October, Parliament to meet this fall

Prime Minister Justin Trudeau says that he intends to name his new cabinet in October, bring Parliament back 'before the end of fall,' and implement the promised federal vaccine mandate as soon as possible. Chrystia Freeland will continue as deputy prime Minister and finance minister, Trudeau said.

DEVELOPING | 35 of 39 miners trapped underground in Sudbury, Ont., have now been rescued

A total of 35 of the 39 people stuck underground at Vale's Totten Mine in Sudbury, Ont., have now been rescued, Vale reported late Tuesday afternoon. A team of doctors is on-site and checking workers as they emerge from underground.

'She cannot have died in vain': Anniversary of Joyce Echaquan's death marked with calls to fight racism

A ceremony was held Tuesday marking the one-year anniversary of the death of Joyce Echaquan, an Indigenous woman who was humiliated by staff in a hospital northeast of Montreal as she lay dying, sparking outrage across the country.