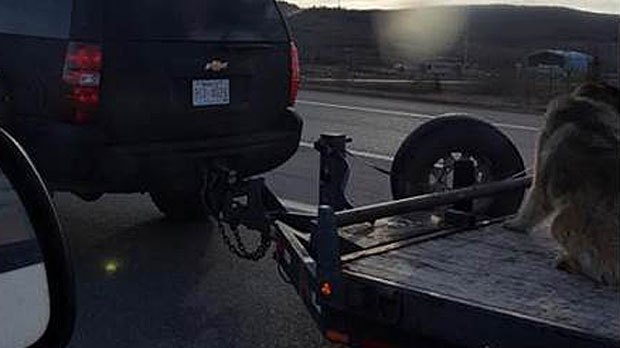 A man from Rocky View County pleaded guilty on February 14, 2018 after he was spotted driving on Stoney Trail with his dog tethered to a flatbed trailer. (Facebook/Ryan Harris)

A resident of Rocky View County has pleaded guilty and fined $1,500 after driving along Stoney Trail at speeds in excess of 80 kilometres per hour with his dog secured to a flatbed trailer behind an SUV.

On Wednesday, Volodymyr Irodenko pleaded guilty to the municipal bylaw violation of allowing an animal to be outside the passenger cab of a motor vehicle on a roadway in connection with the events of October 27, 2017.

A recording of the large breed dog on the trailer travelling on Stoney Trail, that included images of the licence plate of the SUV Irodenko was driving, was posted on social media on October 28 and the Calgary Humane Society and Calgary Police Service launched a joint investigation into the incident. On November 2, Irodenko contacted the Calgary Humane Society to say the dog was his.

Irodenko had told the court that his dog had been sprayed by a skunk and he was transporting the animal to a car wash but the Crown had countered that Irodenko’s decision but the dog and other motorists at risk.

According to the Calgary Humane Society, Irodenko was originally charged under municipal, provincial and federal legislation for offenses ranging from causing an animal to be in distress to transporting an animal outside the cab of a vehicle on November 11.