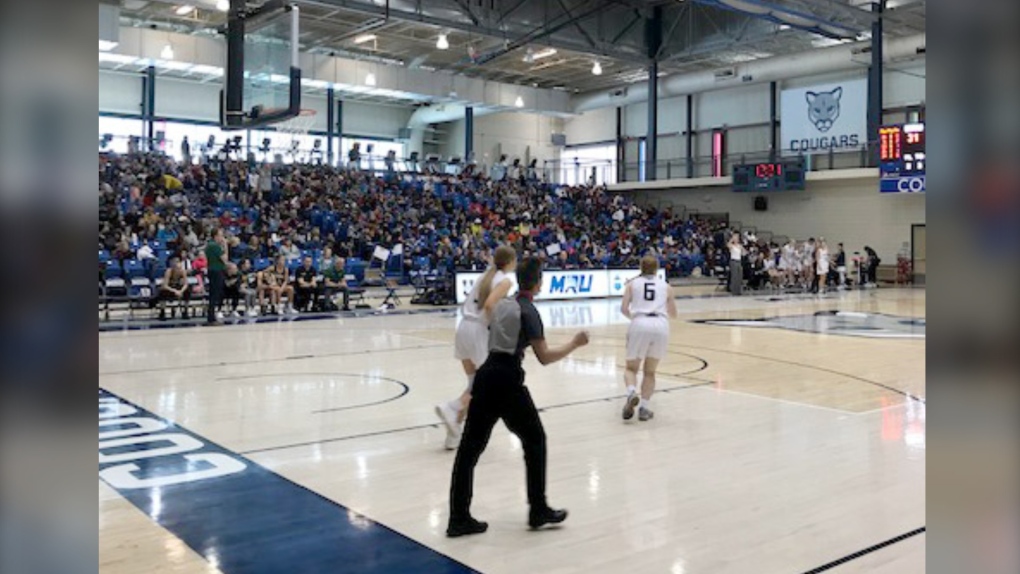 A record crowd of about 1,500 was in attendance as the Mount Royal Cougars faced the University of Regina Cougars on Thursday.

CALGARY — It was a record-setting day at Mount Royal University on Thursday.

Around 1,500 kids jammed into Kenyon Court to watch the men’s and women’s basketball teams take on the University of Regina Cougars.

They were playing the games in the afternoon because of a scheduling conflict with volleyball.

Then the school had an idea.

Why not invite a whole bunch of students to come watch the game.

The event was called “Get Schooled,” and students like Cameron Siebold of F.E. Osborne says it was a great atmosphere and there was more on the line than just the game.

“It’s pretty loud and number four is our assistant principal’s daughter, so she promised us a pizza slice if she gets four three-pointers.”

Maggie Saunders is also a student at F.E. Osborne and says it was a perfect day, no school and she got to watch the games with her friends.

“Yeah I’m having fun. The best part is the excitement and the crowd,” she said.

For the players this was a whole new experience. They’re not used to playing in front of crowds this big. Shooting guard Quinn Taylor of the Mount Royal Cougars men’s team couldn’t help but take it all in.

“Oh yeah, it’s amazing,” he said. “I’ve never played in front of this many fans in my life so it’s pretty awesome to see.”

The MRU women lost their game 67-52. Maddison Hooper, a guard on the team, she says even though they didn’t win, it was still a lot of fun.

“The atmosphere was great,” she told CTV. “The kids really build a lot of energy for us and having them right behind our bench was well was so handy for us.”

The event was so successful, don’t be surprised if Mount Royal University does it again in the future. Sports Information Coordinator Jarron Mueller said he would be all for it.

“It’s been a lot of fun so we’re going to go back and re-analyze and see if it’s doable to do it every year,” he said.

“Ideally that would be great for us and the kids.”