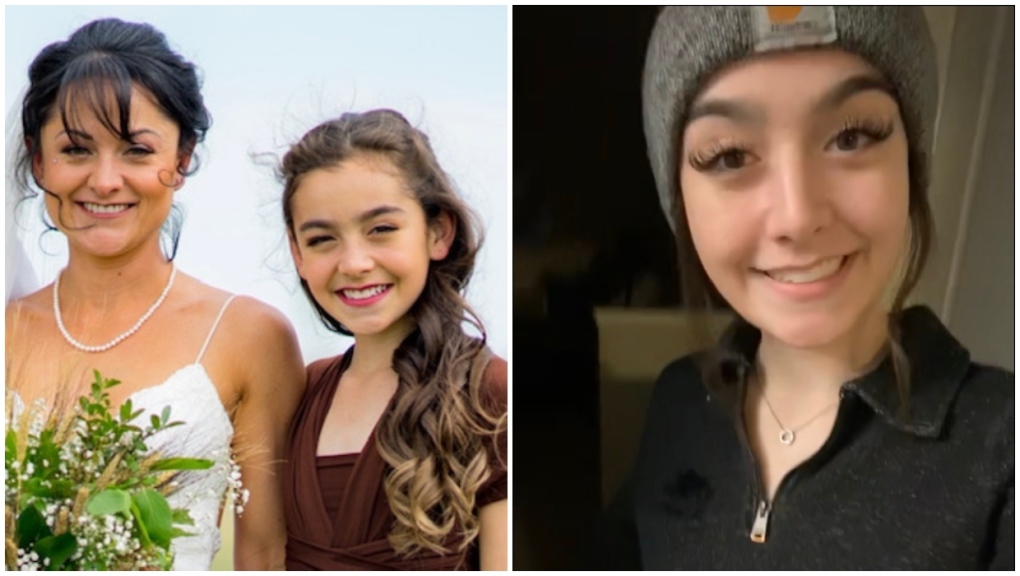 Jayme Erickson, an Alberta Health Services paramedic, and her 17-year-old daughter Montana are shown together (left). Montana (right) died after being injured in a Nov. 15 crash.

An Alberta paramedic called to a crash last week didn’t know she was trying to save her own daughter because the victim’s injuries were too severe.

Jayme Erickson said she did what she could that day and saw the victim airlifted to hospital, only to later find out from police the girl she’d been trying to save was her daughter, just in time to make it to the hospital to say goodbye for the final time.

Erickson shared the story on Facebook, saying she was dispatched with her partner to a crash west of Airdrie, Alta., at around 4:30 p.m. on Nov. 15. There were two injured patients on scene, including the passenger of a vehicle who was trapped and critically injured.

Erickson wrote that she did what she could to assist the critically injured passenger while fire crews worked to extricate the girl from the vehicle.

The patient was then airlifted by a STARS air ambulance helicopter crew to the Foothills Medical Centre in Calgary.

"My shift was over and I went home," Erickson wrote.

A short time later, there was a knock on her door.

"RCMP were at my door, to inform me that my daughter had been in an accident," she wrote.

That's when the reality of the situation hit her.

"The critically injured patient I had just attended to was my own flesh and blood," she wrote. "My only child. My mini-me. My daughter, Montana. Her injures were so horrific I did not even recognize her."

Erickson wrote that she was taken by the officers to the hospital where she was informed that 17-year-old Montana's injuries "were not compatible with life." She said goodbye to her daughter for the final time.

"We are overwhelmed with grief and absolutely gutted," she said. "The pain I am feeling is like no pain I have ever felt, it is indescribable.

"My worst nightmare as a paramedic has come true."

Erickson says she's heartbroken by the loss of her daughter at such a young age.

"I cannot help but be angry for the short amount of time I was given with her," she wrote. "17 years was not long enough. Although I am thankful for the 17 years I had with her.

"I will cherish the memories we made and the time we had together. I am shattered. I am broken. I am missing a piece of me. I am left to pick up the pieces and expected to carry on."

In the final words of her post, Erickson quoted some of lyrics from country singer Cody Johnson's 'Til you can't.

"Love with all your heart. Hold those close to you. Make memories. ‘If you’re going to love somebody, hold on as long and as strong as you can… til you can’t.'"

A GoFundMe page has been created to help support the Erickson family.