Alberta NDP Leader Rachel Notley has won her seat in Edmonton-Strathcona and a majority government, ending the 44-year reign of the Progressive Conservatives.

Jim Prentice's PC party finished the night in third position and he resigned as leader in front of supporters in Calgary soon after the results were learned.

Notley’s party held only four seats when the election was called on April 7 so this victory is a major upset.

“Spring has arrived. A new day has begun,” said Notley. “You voted for change, for better health care, for better schools and for good family-supporting jobs, and we will answer your call.”

Notley also sought to reassure the oil and gas sector. “We will work with you to grow our economy and secure a more prosperous future for every Albertan in every community,” she said.

But she also told her supporters that “we need to go down the road to a diversified and resilient economy. We need, finally, to end the boom and bust rollercoaster that we have been riding on for too long.”

The New Democrats had never won more than 16 ridings in the past, the PCs had 70 seats at dissolution and both the Wildrose and Liberals had five seats before the campaign.

The Liberals appear to have lost all but leader David Swann’s seat, while the Wildrose appear to have gained about 15 seats. Greg Clark won the upstart Alberta Party's first-ever seat, beating PC Education Minister Gordon Dirks in Calgary-Elbow, the seat once held by former premier Alison Redford.

Recent polls had shown the Progressive Conservatives, who have governed for more than four decades straight, were facing a serious challenge from both the Wildrose and the New Democratic Party.

(With files from ctvnews.ca) 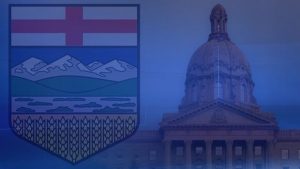