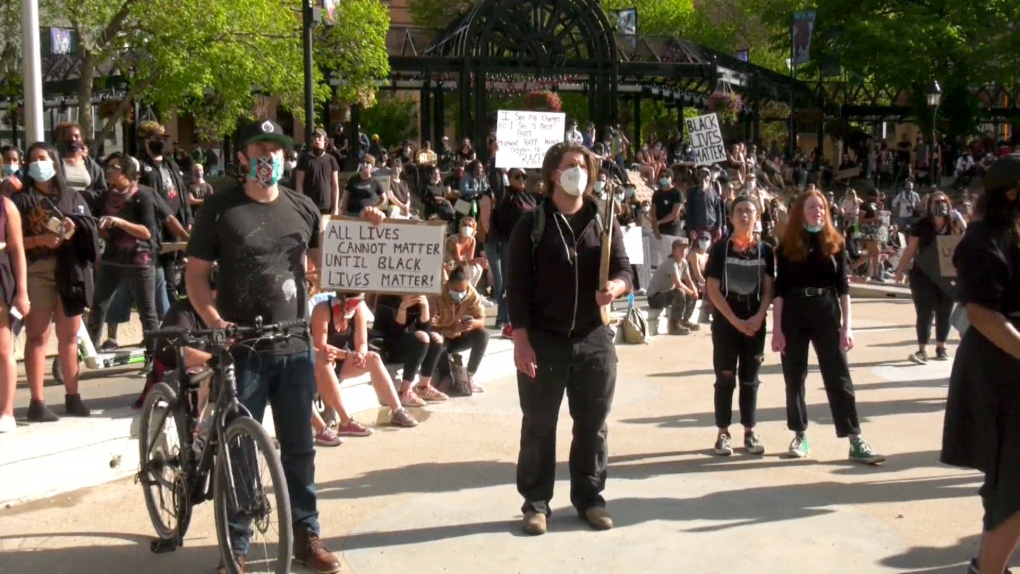 Around 2,000 people marched through downtown Calgary on Wednesday in support of anti-Black racism efforts.

CALGARY -- Massive crowds marching through downtown Calgary in support of anti-black racism efforts may have violated ongoing public health orders that limit groups to a maximum of 50 people, but the message was important enough that the event should have gone ahead, Mayor Naheed Nenshi said during a weekly update on COVID-19.

"If I can be blunt about it, fighting for (the) fundamental human right to life in a protest is not the same as going out for beers with your softball team and I think Calgarians are smart enough, and compassionate enough and thoughtful enough to understand the difference," he said.

"So yes, I really want to say to the organizers of these protests, 'Thanks for working hard, thank you for putting hand sanitzer, thank you for making sure we had 85, 90, 95 per cent people who were covering their nose and mouth to make sure they weren't spreading the disease,' this stuff matters."

The mayor also urged those who took part to get tested for the novel coronavirus as a precaution, especially with a drop-in facility now open at the Richmond Road Diagnostic Centre (1820 Richmond Road S.W.).

"I do think it makes sense and I do think it makes real sense for those who have been in any situation where they've been with a lot of other people to double-down on their own efforts to make sure they're practising very good hand hygiene, they're keeping hand sanitizer with them at all time, and, and, and, if you were at one of those protests, you've got to wear a mask and be super careful in all of your activities for the next 14 days."

Around 2,000 people marched through downtown Calgary on Wednesday — making it one of the largest protests ever in the city — in support of Black Lives Matter and protests happening across North America following the death of George Floyd.

Some took to social media to question why the gathering was being so celebrated when they weren't allowed to have funerals for loved ones.

"I'm going to turn that question righ back on you," Nenshi said. "Let's say you are a police officer, let's say there is a march of 2,500 people, at what point do you say, 'You 50 get to stay, you 2,450 have to go now, and what would happen if you were to do that in a peaceful protest? We've got to be realistic here in terms of what is possible. And we understand overzealous enforcement in protests in others places have led to very, very bad outcomes."

As of Wednesday afternoon, there are 7,076 confirmed cases of COVID-19 in Alberta, with 6,587 of those considered recovered. There have been 145 deaths attributed to the virus.