Calgary councillors attending a special meeting of city council on Wednesday afternoon voted to pass a new COVID-19 bylaw that makes it mandatory for all eligible local businesses to opt into Alberta's vaccine passport program.

The vote to pass the bylaw was nearly unanimous with only Ward 11 Coun. Jeromy Farkas in opposition.

The new bylaw includes (but is not limited to) restaurants, bars, pubs, nightclubs, casinos, bingo halls and VLT lounges – all of which were eligible to opt into the province's Restrictions Exception Program.

It will also apply to recreation facilities in Calgary, meaning anyone over the age of 12 will need to show proof of vaccination status or a negative COVID-19 test to enter. The bylaw will not apply to anyone under the age of 18 participating in a school-related activity or anyone receiving health, wellness or personal services. 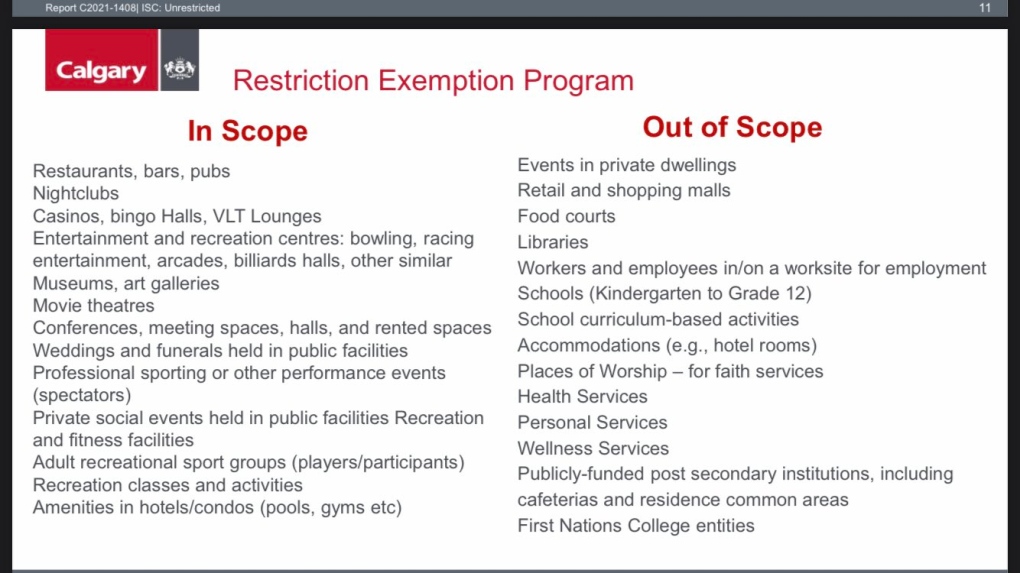 A slide shown in Calgary city council on Wednesday, Sept. 22, 2021, shows which Calgary businesses would require proof of vaccination or a negative COVID-test.

"This is no silver bullet, Calgarians. This is a mop-up job because of the failure of the leadership of Premier (Jason) Kenney," Ward 13 Coun. Diane Colley-Urquhart said.

"I do believe that, with his failure of leadership, this is a dereliction of duty," she said. Mayor Naheed Nenshi said he feels the UCP's refusal to use the term "vaccine passport" when speaking about the program is causing confusion.

"Businesses were really saying that it is not fair and we're getting the brunt of abuse because the province has made it look like it's our choice when it's really not our choice," Nenshi said.

"So, they were really asking us, 'listen, make it a bylaw so that we can say that it is a bylaw.'"

Calgary peace officers were unable to enforce the restrictions in the REP program, but passing the bylaw gives them the power to do so.

The bylaw comes with a $500 fine for people and/or businesses that don't comply and will be effective as Thursday.

"I don't agree with bringing in an additional city vaccine passport on top of what the province has already implemented," said Farkas, the only councillor to vote against the bylaw.

"I understand why people want the city to clean up the mess that the province has made, but this is confusing enough already."

The city has already created signage for businesses to display the bylaw and what is required by patrons.

Failure to display the fine could result in a $200 fine.