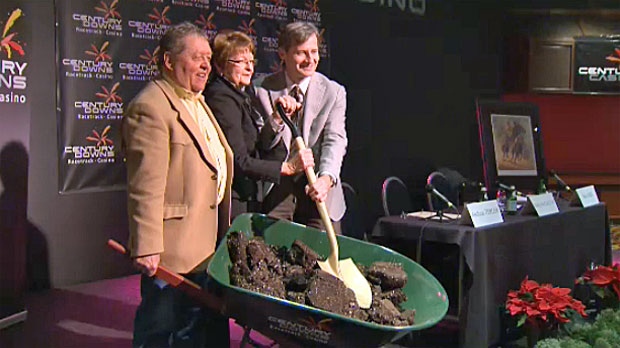 A ceremonial sod turning was held on Wednesday, Dec 4, 2013 to kick off the project.

A new entertainment facility is planned for an area north of the city limits and a number of dignitaries and stakeholders were on hand for a ceremonial sod turning on Wednesday.

The United Horsemen of Alberta and Century Casinos are building a new racetrack and casino next to CrossIron Mills called Century Downs Racetrack and Casino.

“It will provide the opportunity for an entertainment venue that is going to be second-to-none in this area but also the economic activity that occurs around the racing industry whether it’s the horse purchase itself, whether its tack shops, western wear, hay sales, all of those things, restaurant, hotel, tourism, it’s endless as to what it does,” said Shirley McClellan from Horse Racing Alberta.

The project has been in the making for years and McClellan says there has been a void since 2008.

“The Calgary market is huge. A huge number of horse owners, trainers, live in this area and they’ve been without a track to run on in their own community since 2008. So we’re excited,” said McClellan. “People here are hungry for this. They miss it, they want it back and they’re looking forward to it.

The facility will be the only horse racetrack in the Calgary area and includes a 5.5 furlongs (0.7 miles) racetrack.

The casino’s gaming floor will have 550 gaming machines, a bar, a lounge, restaurant facilities and an off-track betting area.

The project is expected to cost about $24 M.

Officials hope to have Standardbred racing on one track by the end of 2014 and Thoroughbred racing up and running by 2016.