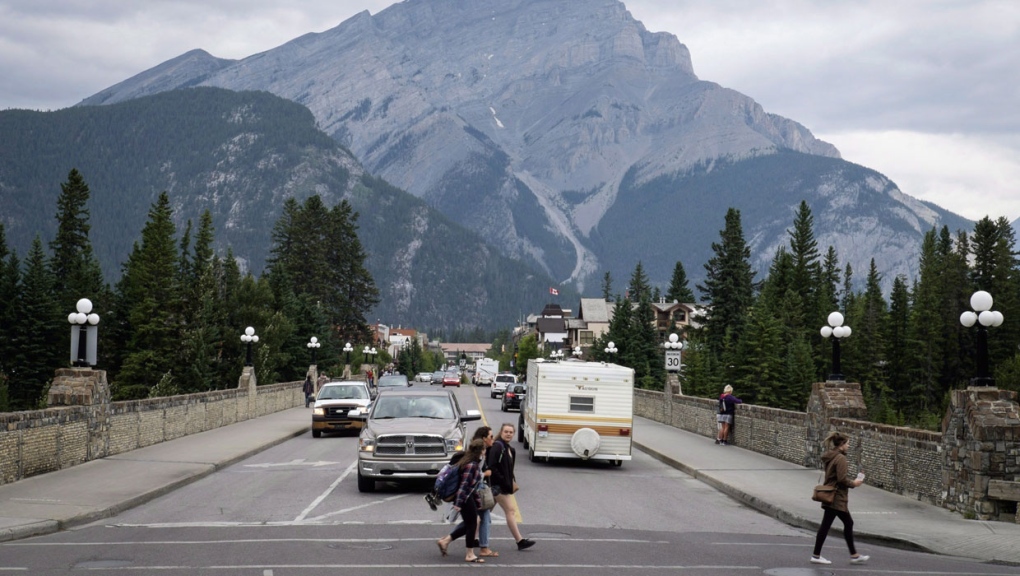 Parks Canada says a gondola project that would have taken skiers from the Banff townsite to Mount Norquay because it doesn't fit with policies on development limits. (THE CANADIAN PRESS/Jeff McIntosh)

BANFF -- Parks Canada has rejected a proposed gondola to take skiers and hikers from Banff townsite to the summit at the Mount Norquay ski resort.

The federal agency was considering a proposal by Liricon Capital, which owns Mount Norquay resort, to redevelop lands both inside the Alberta mountain town and at the ski area in the national park.

Officials with Parks Canada said they carefully reviewed a feasibility study and other materials related to that proposal, which was submitted in May 2018.

“There will not be further consideration of the proposed gondola, nor the proposed Grizzly Pavilion and boardwalks, which would be located on lands outside the Mount Norquay leasehold,” the agency said in a written statement to The Canadian Press.

“These components of the feasibility study do not conform with the agency's policies on limits to development and ski area management in Banff National Park.”

The proposal by Liricon, which was supported by the Town of Banff, would have potentially closed the only access road to the ski hill and returned that land to Parks Canada. Visitors would then park in new lots at the train station in the townsite and ride the gondola over the Trans-Canada Highway to the resort.

Parks Canada said that would negatively affect public use of the Mount Norquay access road.

Jan Waterous, a partner at Liricon Capital, said the company is disappointed with Parks Canada comments on the proposal but it will try again.

“We will be resubmitting a different proposal for Parks' consideration in the near term that addresses their concerns,” she said in an email.

Waterous said the company remains confident that the project, along with some transit proposals, could be beneficial for a wildlife corridor that goes across the Norquay road.

“Luckily, the science is on our side,” said Waterous.

Conservation groups applauded the move, however.

sound ecological decision making and a welcome reaffirmation of Parks Canada's commitment to limiting development in our national park.” said Reg Bunyan of the Bow Valley Naturalists, in a statement.

“With this decision made, our hope is that Parks Canada will move quickly to limit the impact of of vehicular traffic on the wildlife corridor by implementing the recommended seasonal dusk to dawn vehicular restriction.”

The Canadian Parks and Wilderness Society also issued a statement, saying the proposal wouldn't have done enough to protect the wildlife corridor around Banff.

The extent of development in the proposal would have further compromised critical habitats and connectivity,” said conservation director, Katie Morrison.

“Parks Canada agency holds an important responsibility, to safeguard National Parks for all Canadians, we are happy to see they have made the right decision. We look forward to continuing to work with Parks Canada and other stakeholders through the upcoming 10-year Parks Management Planning Process to find solutions that address ecosystem and visitor needs."

An environmental study done for Liricon and posted online suggested the gondola was not likely to have any negative impacts on grizzly bears, wolves and cougars. It suggested further study was needed on bighorn sheep.

In its statement, Parks Canada said Banff National Park's management plan and the Parks Canada ski area management guidelines were developed with extensive public input and based on the best-available science and research.

“It is Parks Canada's position that its policies on limits to development are fundamental to protecting the ecological integrity of Banff National Park and to ensure that this treasured place is preserved now and for future generations.

“Parks Canada is not willing to alter its policies to accommodate this proposal.”

Environmental groups welcomed the decision by Parks Canada to reject the gondola, as well as the pavilion and boardwalks.

“We are pleased that Parks Canada ... is prioritizing nature and ecological integrity in the region,” said Katie Morrison, director of conservation for the southern Alberta chapter of the Canadian Parks and Wilderness Society.

Reg Bunyan, who's with the Bow Valley Naturalists, said the group hopes Parks also moves to limit the impact of traffic on the road by bringing in a dusk-to-dawn restriction.

Morrison added that the for-private proposal wouldn't have done enough to improve the wildlife corridors around the town of Banff.

“The extent of development in the proposal would have further compromised critical habitats and connectivity,” she said.

Liricon also wants to develop land to allow passenger rail to Banff from Calgary as part of the proposal.

In the statement, Parks Canada said the potential for train service would be subject to a separate review.

This report by The Canadian Press was first published Jan. 21, 2020.

With files from CTV News Calgary.