The Alberta Serious Incident Response Team has not been directed to investigate an officer's actions during an arrest on a southern Alberta First Nation that involved the use of a conducted energy weapon, and that decision isn’t sitting well with some area residents. 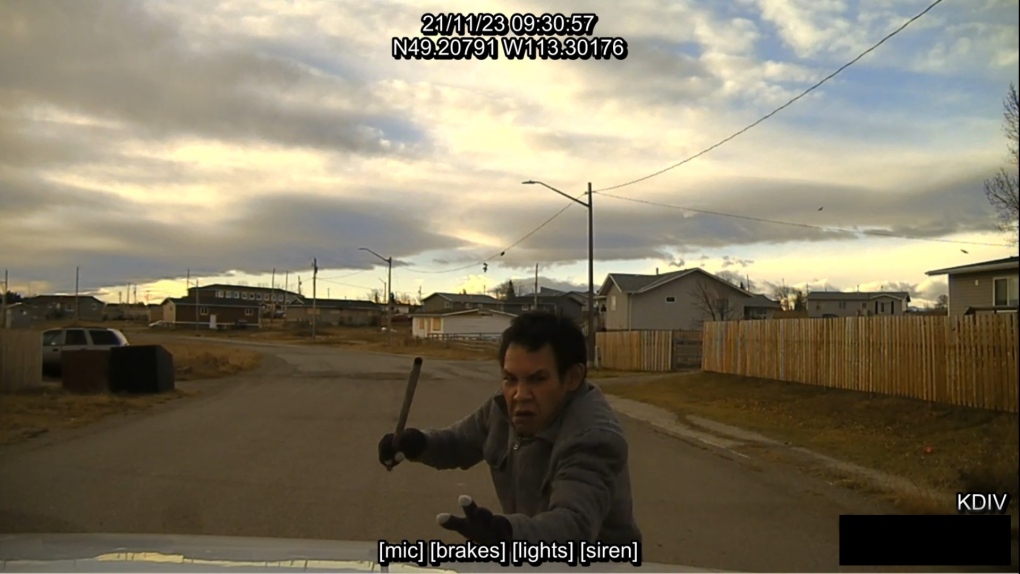 RCMP have released a Watchguard video still of a man armed with a metal pipe, said to be suspect Dylan Bird, threatening an RCMP member during a Nov. 23 arrest on the Kainai Nation. (supplied: RCMP)

Members of the Blood Tribe gathered in protest outside the RCMP detachment in Cardston on Monday, seeking answers about the arrest of 27-year-old Dylan Riley Bird.

“He's epileptic, he was born with a piece of his skull missing so he has a plate, I think he was scared, he was trying to protect himself. He didn't know what was going on and he was scared and he reacted,” said Bird’s uncle, Ronald Panther Bone.

Bird was walking down the street last week when an RCMP officer attempted to arrest him for outstanding warrants on charges of uttering threats, criminal harassment and mischief.

According to police, Bird was holding a metal pipe, which he used to hit an officer as he was being arrested, causing minor injuries.

That's when the officer used a conducted energy weapon on Bird, twice, and he was detained.

"Both the first and second deployments of the conducted energy weapon were unsuccessful in gaining control of the subject," said Cardston RCMP Sgt. Robert Wright in a video statement. "The officer called for assistance and a nearby officer immediately attended the location to assist in the suspect's arrest.”

Bird, a member of the Kainai Nation, faces new charges related to:

The RCMP notified the director of law enforcement, as required by law, but he deemed the incident out of scope and did not direct the province's police watchdog to investigate. Mounties are now conducting an internal review.

“The Alberta RCMP believe in processes that seek the facts and it’s important that processes taken to assess the actions of all those involved, including the police, are fair, transparent, and defendable,” said Wright.

But that process isn't sitting well with Blood Tribe members.

“We’ve been going through this all our lives and it should stop. They're supposed to be protecting us, not brutalizing us,” said Panther Bone.

“They see one native doing something bad they automatically drive by, we're all like that. That native steals, that's the way they think we are,” said Panther Bone.

Bird has been released from custody ahead of his scheduled Dec. 13 court appearance in Cardston.

The original version of this story, and its headline, indicated the Alberta Serious Incident Response Team (ASIRT) had either launched an investigation into, or declined to investigate, the arrest of Dylan Bird.  RCMP did not consult ASIRT on this matter as it was deemed 'out of scope' for the watchdog agency.