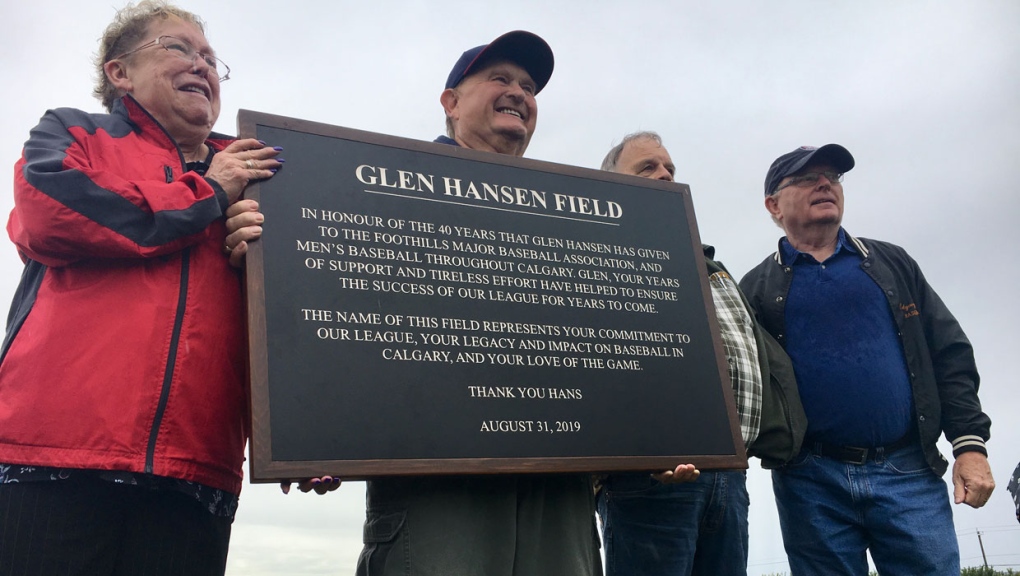 A northeast baseball diamond was named in honour of the Calgary man who helped build the sport in the city.

Following 40 years of involvement in the local baseball scene, Glen Hansen had his name engraved into Calgary’s history.

In front of an enthusiastic crowd braving wind and rain, Airways Park was officially renamed Glen Hansen Field at a ceremony held on Saturday.

A founder, coach, president and driving force behind both the Calgary Cardinals and the Foothills Major Baseball Association (FMBA), the 73-year-old accepted the award with a sense of poise and fulfillment.

"From a guy who grew up in a small town who wasn’t a very good ball player but had a passion, I was good at organizing. When this league started, I threw everything I had behind it," explained Hansen.

"It just means everything to have a place for kids and guys to play after they’re done college. And that’s what this is."

As one of the longest-running men’s baseball team in western Canada, the Calgary Cardinals were one of the three original teams of the inaugural Calgary men’s baseball league. Restructured into the FMBA, the league has now grown to 11 teams, and is continuing to expand.

"I would argue the league wouldn’t be here without him to keep things together," said Tom Sidorkewicz, the current president of the Cardinals.

Referring to its dependency on volunteers and financial sponsors in the league’s early days, Sidorkewicz emphasized how Hansen has been a guiding force throughout.

"It’s important to have people like that in a league where people are finding other things to do, we’re all growing up and having kids, but we’re still finding a way to take part," he added. "He’s the tie that binds."

Hansen plans on staying with the league as long he can.

"I can go on forever, and I’ll keep coming until they tell me, 'Hans, you have to stay home.'"

Baseball fans looking catch a FMBA game can take in all the action at Glen Hansen Field, located at 2433 Vista St. N.E., near the 32 Avenue exit off of Deerfoot Trail.