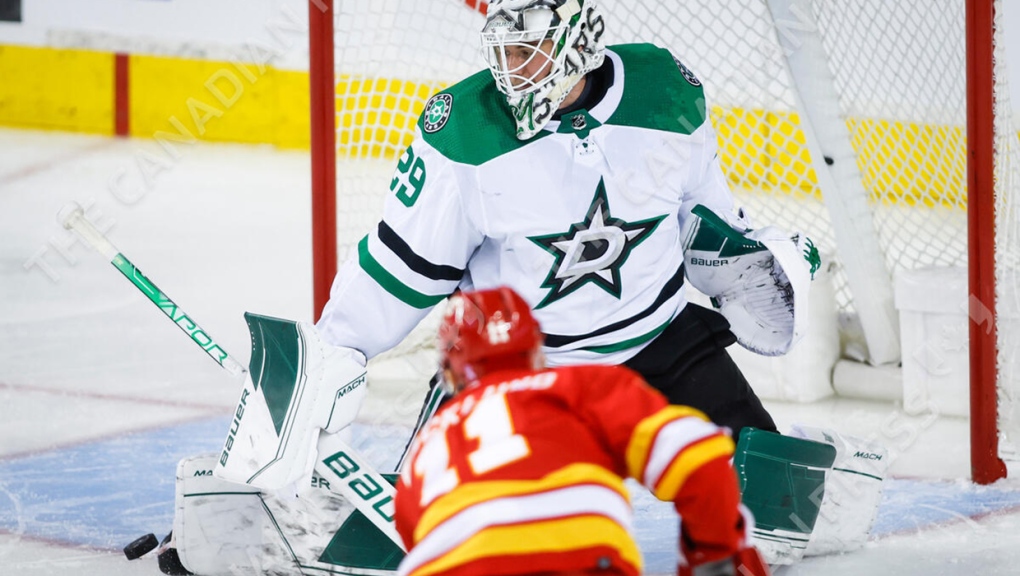 Goaltender Jake Oettinger's 29-save shutout led the Dallas Stars to a 2-0 win over the Calgary Flames on Thursday to even their playoff series 1-1.

Joe Pavelski scored and Michael Raffl added an empty-net goal for the Stars.

The best-of-seven conference quarterfinal series heads to Dallas for Saturday's Game 3 and Monday's Game 4 at American Airlines Arena. The Flames opened the series with a 1-0 win Tuesday.

Calgary (50-21-11) finished first in the Pacific Division, while Dallas (46-30-6) earned the top wild-card seed in the Western Conference.

The Flames outshot the Stars 12-7 in the third period, but couldn't generate a goal. With Markstrom pulled for an extra attacker Raffl scored into an empty net with 69 seconds remaining in the game.

Outplayed in the opening period, Calgary generated more scoring chances for an 11-7 edge in shots in the second. The Flames were denied by Oettinger, however, and didn't get their sticks on the few rebounds the Dallas goaltender allowed.

In a bid to generate more offence, Stars head coach Rick Bowness continued to play forwards Jamie Benn and Tyler Seguin on separate lines as he did in the second and third period of the series opener.

The visitors outshot the Flames 9-6 in the opening period and strengthened their forecheck to slow Calgary coming out of its own zone. The Stars mustered more hits (25) in the first 40 minutes than they did in Game 1 (20).

Darryl Sutter talks to the media after Game 2. pic.twitter.com/isvTPYqubA

After not registering a shot on net in Game 1, Pavelski scored the first goal for the series for the Stars at 7:47 of the first period on a defensive-zone Flames turnover.

Defenceman Noah Hanifin put the puck off the boards and onto the stick of Jason Robertson inside the blue line. Pavelski deflected Robertson's shot over Markstrom's glove.

A Johnny Gaudreau goal scored on a breakaway 43 seconds after puck drop was waived off for offside.

Matthew Tkachuk and John Klingberg renewed hostilities from the first game in which Tkachuk hammered Klingberg into the boards behind Calgary's net late in the first period.

Tkachuk cross-checked Klingberg, who took a roughing penalty, in the aftermath of Gaudreau's disallowed goal to send both men to the box.

This report by The Canadian Press was first published My 5, 2022.

A high school friend of B.C. teen Amanda Todd has testified he took action when he saw what he described as a 'pornographic' picture of her on Facebook in November 2011.

How an increasingly popular supplement landed a man in the hospital

A British man's overdose on vitamin D is a cautionary tale for people who are considering adding supplements to their lives, according to a paper published Tuesday in the journal BMJ Case Reports.

As pandemic restrictions subside throughout Canada, medical professionals reflect on how the international health crisis has revealed the need to carry out discussions about dying.

Families of victims of the Nova Scotia mass shooting are pondering whether to continue participating in the public inquiry into the tragedy because key witnesses are being shielded from cross-examination.