CALGARY. For many residential school survivors, those are days they want to forget. Third-generation survivor Phyllis Webstad, however, used her dark memories of residential school instead to fuel a campaign for awareness that created Orange Shirt Day.

Webstad, was only six when she entered St. Joseph Mission Residential School in Williams Lake, B.C. Her grandmother insisted on making sure she looked presentable for the first day of school and took her shopping, despite knowing that her new clothes would be taken away.

“I chose a shiny orange shirt for my first day of school, and of course when I got there, my shirt was taken away and I never remember wearing it again,” said Webstad.

Thanks to Webstad’s story, that orange shirt is now a symbol that honours survivors and their families. What started in 2013 at the St. Joseph Mission Residential School commemoration project and reunion, has since grown to Edmonton in 2016, and now Calgary.

On Thursday, the city officially proclaimed Sept. 30 to be Orange Shirt Day.

Webstad said, “My own family, we don’t talk about these things so with Orange Shirt Day, [even] if it’s just once a year, we may share a story or two and become a little closer.”

Leslie Ronaldson, Executive Director at Safe and Caring Schools & Communities, said the effects of residential schools are long lasting, “I think it’s important to note that they say about seven generations until we truly heal.”

While Orange Shirt Day is officially on Sept. 30, hundreds of students and supporters gathered Thursday to observe the second annual commemoration in Calgary.

This year, 15-year-old Farrah Ochiese from Edmonton was chosen as the logo design winner. Her design of a mother protecting her children beat out more than eight hundred entries. She said her inspiration comes from her own mother who is always watching out for her. 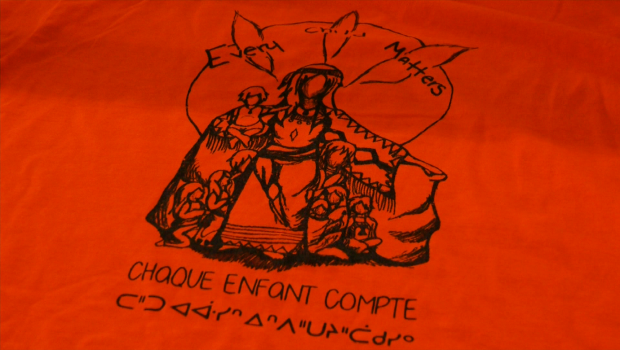 “Everyone lost their kid through residential schools," Ochiese said. "They always wanted them back. They fought for them.”

Webstad said that seeing Canadians wear orange gives her and other survivors a sense of justice, “To know that society is acknowledging that what happened was wrong," she said.

"Hopefully they’ll make sure that it never happens again.”