An expert at the University of Calgary says a float in a small Alberta town's annual parade made a mockery of some of the symbols the Sikh religion hold sacred.

"We shouldn't be naïve that this is not simply a comment about politics," said Harjeet Singh Grewal, a professor of classics and religion at the institution.

On June 25, in a parade for the Sundre Pro Rodeo, a volunteer dressed up as Prime Minister Justin Trudeau was driving a tractor pulling a manure spreader. In the spreader was another volunteer who was supposed to be NDP leader Jagmeet Singh.

The latter was wearing a turban, a fake beard and had long hair.

Those three things, Grewal says, are considered to be articles of faith that are sacred to the Sikh community.

"Bringing up that identity also cycles back to the public sphere and discriminations that Sikhs who are practicing face every day and the immobility that they have."

Grewal said people need to be aware of the symbolism of having a Sikh man sitting where the manure should be and being pulled by a tractor.

“The symbolism goes beyond politics when you generalize to a visible minority or religious minority in Canada through the way that it is portrayed,” he said.

“There are other ways to make comments about politics, why bring in a visible religious minority to do that?”

Grewal said it’s important for people to understand the realities practicing Sikhs are faced with.

“I, as an adult, had somebody try to physically take my turban off. So, I think you know these things happen and we should be aware.”

Lynne Hoff, the woman who created the float, contends it was political satire, adding that she was not attempting to be racist.

However, Hoff's motives are being called into question after several social media posts that have targeted a number of groups, both political and religious.

In a post to the Sundre Facebook group, she asked for volunteers to dress as Trudeau and Singh. In it, she misspells turban and Singh’s name twice, calling him “STingh” and “stinky.”

She denies intentionally writing those things and blames it on autocorrect.

Hoff also made an anti-Muslim tweet to former Calgary mayor Naheed Nenshi last year over pandemic restrictions. Nenshi commented on it then removed the tweet so people wouldn’t “pile on her.”

"What I said was in anger," Hoff said, brushing off other criticism as "cancel culture."

"Three of my friends had lost businesses in Calgary – one of them had committed suicide." 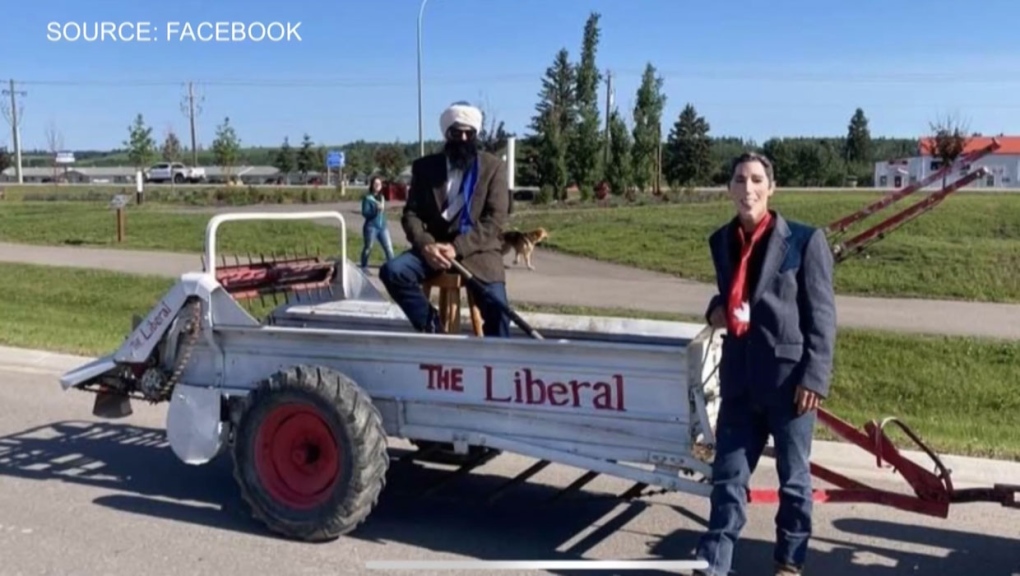 No matter what her motivations for the parade stunt were, the Alberta MLA whose riding includes the town of Sundre says he doesn't agree.

"I called out Justin Trudeau when he did black face as well," said Alberta Finance Minister and MLA for Rocky Mountain House-Rimbey-Sundre Jason Nixon.

"It certainly came across to the Sikh community inside this province as racist. I would say it was a poor reflection on my community and not an accurate reflection of Sundre."

The Sundre Pro Rodeo and its parade committee have said they did not approve the float to go ahead and will be taking steps to prevent such situations in the future.

(With files from Nicole Di Donato and Tyson Fedor)